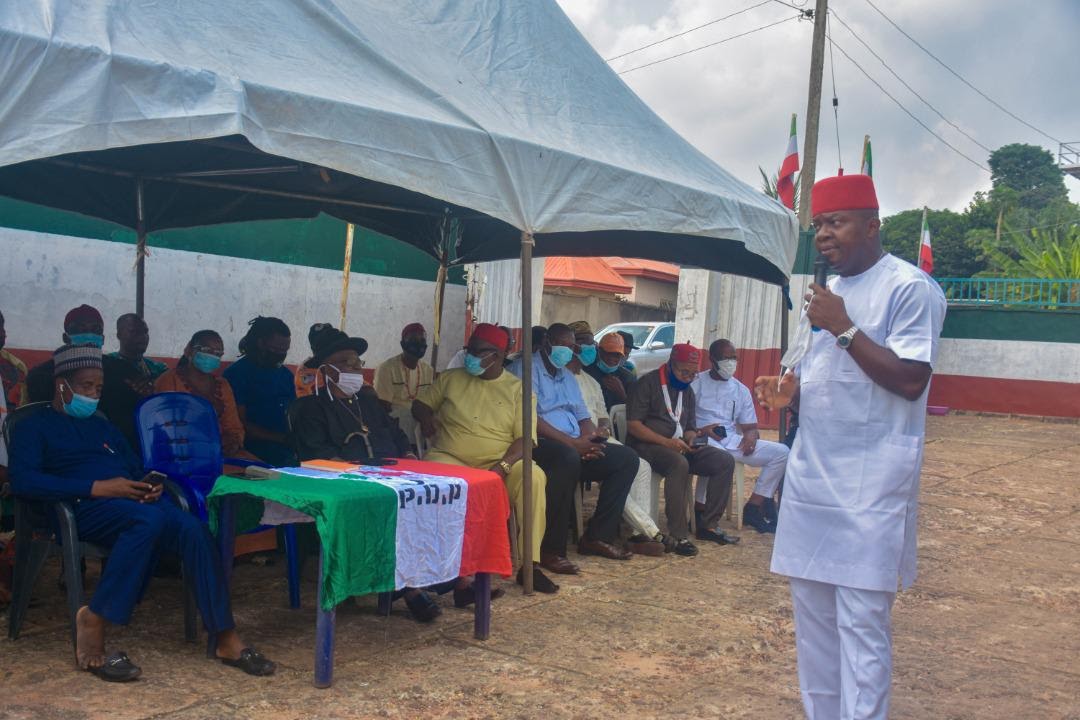 Valentine Ozigbo, a leading governorship aspirant in Anambra State, on Saturday, January 16, 2021, assured the Peoples Democratic Party (PDP) leadership in the state of victory in the 2021 election if he wins the party’s gubernatorial ticket.

The past President of Transcorp Hilton and a PDP Gubernatorial aspirant has broken another record at the Anambra state PDP secretariat Udoka Estate, as he arrived with exceptional packages.

Attendees included members of the State Working Committee and entire members of the state executive committee which includes the 21 LGA chairmen. Chief Tim Egboka (Kpakpando Umuchu) introduced members of Mr Val Ozigbo campaign team and thanked the state officers for turning out enmasse for the meeting. Most remarkable was the fact that Mr Val and his team arrived before schedule and helped out in preparing the venue to ensure hitch-free proceedings.

In the course of his address during the meeting, Mr Ozigbo expressed confidence of victory for PDP at the forthcoming gubernatorial election. He stated that the signs are clear for a possible PDP takeover as soon as the election takes place, noting that even if the aspirants were reduced to three or two, he will be among the chosen.

Speaking further, Val Ozigbo said that the rationale behind the gathering was to give God Almighty thanks for sparing our lives and to appreciate the party officers for their remarkable effort and contributions towards party upkeep and advancement. He prayed God to bless them and the entire members of the PDP family.

The business mogul and emerging super politician who has traversed every nook and cranny of Anambra State consulting people urged the party officers who consider him their second choice to evaluate and confirm him first choice because he has what it takes to get things done differently and appropriately.

Mr Ozigbo emphasized his readiness to face the primary elections if it was conducted today but acknowledged the fact that the exercise should however follow due process, a process that will unify the party and collapse it into a formidable force.

He made it clear that he wouldn’t be running for this election save the confidence he has in the integrity of the Hon Sir Ndubisi Nwobu led executive committee. He therefore expressed appreciation to Mr Peter Obi, PDP BOT members, national officers, Senators, zonal and state officers of the party. He hailed Hon Nwobu for the quality of leadership he has been providing from inception.

Going forward, Val Ozigbo assured the party officers that provision has been made for everything needed to prosecute his election ranging from resources, connection, people, contact to security. He added that the extra thing required is for PDP to give him the mandate to go out there and bring back victory to the family. This he said is achievable through mass mobilization, proper sensitization and show of decency.

Ezeego Amesi went ahead to posit that he has made arrangements for adequate mobilization of different institutions and business clusters for effective prosecution of the election in view. He moved on to announce the packages he has for the party officers comprising bags of rice, envelopes and 8 Sienna buses for party officers.

That announcement was followed by a standing ovation, songs of praise and appreciation from members who were overwhelmed over such first of it’s kind gesture since the inception of the present leadership of the party.

The state chairman of the party Hon Sir Ndubisi Nwobu (Obuka Awka) in his remarks stated that it was not easy for any aspirant to visit the party secretariat in the company of 3 former state chairmen of the party which he described as a serious signal. He said that Val Ozigbo has demonstrated optimism and capacity to clinch the party ticket. He also expressed satisfaction with the campaign activities of Team Val Ozigbo whom is seen campaigning continuously, almost everywhere.

Furthermore, Obuka reassured Ezeego that he will live to testify after the party primaries that he met very honest people contrary from negative insinuations that will never see the light of the day as far as his leadership is in charge. He noted that gone are the days when aspirants were in possession of lists of ad-hoc delegates because his EXCO have resolved to do things differently.

According to the state chairman, if wealth was all that determines victory, Joe Biden could not have won President Donald Trump, and same is applicable in politics globally. He said there must be proper party congress to elect the 3-Man delegates across the legislative wards. He prayed God to replenish Mr Valentine Chineto Ozigbo and guide him through the task ahead as he continues with his campaigns.

The 2019 PDP House of Reps candidate for Dunukofia, Njikoka and Anaocha Federal Constituency Hon Barr Valentine Ayika who was a member of Val Ozigbo campaign team took the floor and addressed the party officers. Barr Ayika who won the party primaries as well as the general elections served for a while before he was removed in a controversial legal action instituted by his APGA opponent Mr Dozie Nwankwo.

Barr Ayika in his usual attitude got the audience clapping the very moment he took the floor. He however made his point clear that the team would be banking on the chairman’s promise to conduct credible intraparty elections, which he said would require a lot of effort and steadfastness to achieve. He appealed to the party officers to see and treat Mr Ozigbo as their choice candidate, adding that he will also support the officers in his own way, in due course.

Barr Ayika concluded by appealing to the party officers to ensure that their votes are not reserved for the highest bidder, noting that in as much as money is important in politics, patriotic citizens should not see it as a yardstick for assessing and electing a credible candidate.

ANAMBRA 2021: ‘PDP’s VICTORY IS ASSURED WITH MY CANDIDACY’ – OZIGBO PROMISES AS HE MEETS STATE EXCO