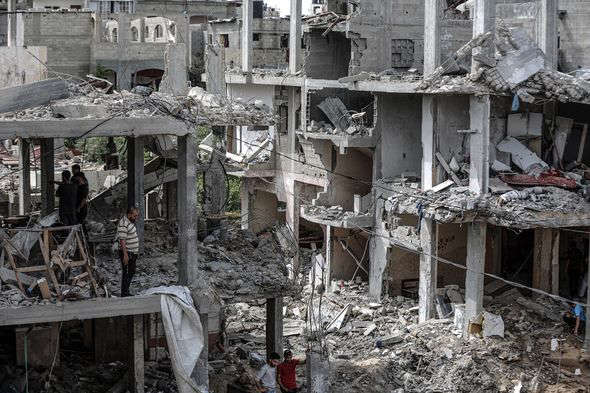 After eleven days of cross-border strikes between the two nations, Israel and Palestine have for now called a ceasefire and ended the violence and destruction. At least 232 Palestinians, including 65 children, were killed in the Israeli bombardment.

On the Israeli side, 12 people, including two children, died.

It is believed the violence was fuelled by Israel’s evictions of Muslim communities living in the east of Jerusalem.

But despite the truce, human rights activist Philip Baldwin has warned long-term peace in the region is not possible.

Mr Baldwin said on Sunday : “Whilst the cycle of hate continues I do not think that long-term peace is possible in the region.

“My hope is for a younger generation of Israelis and Palestinians, who may have different values to their parents and grandparents.

“Perhaps they can envisage a life which is not dominated by Israeli-Palestinian tensions?

“The bombardments leave scars which are both physical and emotional.

“Sadly, I doubt that a solution will be found during my lifetime.”

Mr Baldwin went on to say how while Israel has a “right to defend itself”, Palestinians live in “constant fear”.

He continued: “Although Israel does have a right to defend itself, I agree that Israel responded in a disproportionate way to Palestinian hostility.

“Palestinians live in constant fear, do not have access to adequate medical care, may have their homes destroyed at any time and have limited potential for employment.

The ceasefire has been welcomed by nations across the world, including the United Nations and Dominic Raab, Britain’s Foreign Secretary

Antonio Guterres, UN secretary-general, said: “I stress that Israeli and Palestinian leaders have a responsibility beyond the restoration of calm to start a serious dialogue to address the root causes of the conflict.

“Gaza is an integral part of the future Palestinian state and no effort should be spared to bring about real national reconciliation that ends the division.