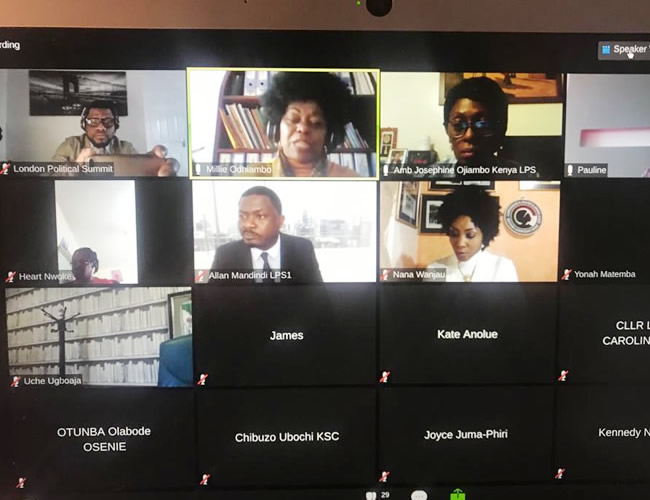 The London Political Summit, the yearly event that engage Political and economic leaders from all over the world Kickstarted on Tuesday with  pre- summit virtual event .  As the actual summit is schedule for later this year, the pre-summit event acted as a warm up to what is expected at the actual summit which is scheduled for October . As the world is facing a global pandemic that is proving challenging to many countries, Covid19 was the centre of the discussion.

The pre-summit event saw high profile guests who took time to share what their governments are doing to help in the fight against Covid19. British Conservative Party, MP for Peterborough, Hon Paul Bristow; Malawi Deputy Minister for Health Hon Chrissie Kalamula Kanyasho; Member of the House of Representatives, Nigeria, Prof. Steve Azaki and Hon Millie Odhiambo Mabona, MP for Mbita constituency, Kenya were some of the main guests.

The event which used the virtual platform Zoom was openned up by hosts for the day, Broadcaster Pauline Long and Ambassador Dr Josephine Odiambo who welcomed all the participants . They gave an overview of what London political summit is all about, as a growing think-tank platform set up to engage with Political, Social and economic leaders. They Introduced the theme of the pre-summit which was “Covid19, Post-Covid19 and SDG positives”.  In her remarks Dr Josephine Odiambo said “The pandemic is much more than a health crisis, it is an unprecedent socio-economic crisis. Disrupting every one of the countries it touches, it has the potential to create devastating social, economic, political and cultural effects that will leave deep and long-lasting scars”

First to speak was British MP Paul Bristow. In his address he several measures that Britain has put in place not only to combat Covid19 but also to help its citizens that have been affected by the pandemic. Bairstow gave an example of the furlough scheme that has seen the government paying 80% of the wages of the workers whose companies have temporarily closed due to the pandemic. He also said the government did introduce a lockdown which currently has been eased, is introducing measures of the need for people to wears masks when in public and the ongoing civic education around matters concerning the pandemic. Bristow acknowledged that some things might have been easier for Britain to implement as it is a rich country, but asked for third world countries to be helped so that the pandemic should be fought using coordinated global efforts.

Taking her turn Malawi Deputy Minister of Health  Chrissie Kalamula Kanyoso told the summit that the country is facing challenging times as Covid cases are on the rise “ we are just getting to grips with the reality on the ground , as this is a new government that was only voted in weeks ago” Malawi recently had a presidential election, a situation which is attributed to helping the spread of the virus as large crowds kept gathering as the politicians  did their campaigns. Kalamula said while civic education on issues of hygiene, social distancing remains key, Malawi faces the challenge of lack of enough face Masks, protective equipment for the frontline workers and not enough ventilators around. She was however optimistic that the county will do whatever it can with the resources available.

Prof. Steve Azaki and Kenyas Millie Odhiambo Mabona shared experiences of what their countries are doing respectively. In Nigeria for instance the government has put in place measures to contain the virus including lockdowns which have affected the economy. In the face of plummeting fuel prices, the government has admirably allocated incremental funds, material and manpower resources to the health sector. In Kenya, The first confirmed case was reported on March 14, 2020. The government has since adopted several containment measures, including social distancing and heightened restrictions on most non-essential social spaces and gatherings. The multi sectoral Kenyan response to Covid19 is led by the National emergency response committee of the Ministry of Health.

Speaking to 247malawi News, Allan Mandindi , who  was one of organisers  said he was excited with how the pre-summit event turned out . “ The world is passing through such a difficult time with the Covid19 situation . It is even a big concern for Africa and  the discussions and knowledge that we have shared here will go along way to help our leaders and decision makers  to come up with good strategies to help their countries fight the pandemic “  Mandindi went further to say he  is hoping the actual  summit due in a few months’ time will even  be  bigger

According to World Health organisation (WHO)  latest figures  Africa has 611,185 confirmed cases. Globally 14,562,550 are confirmed to have the virus., Africa presents a challenge with its fragile healthcare systems which could be overwhelmed.