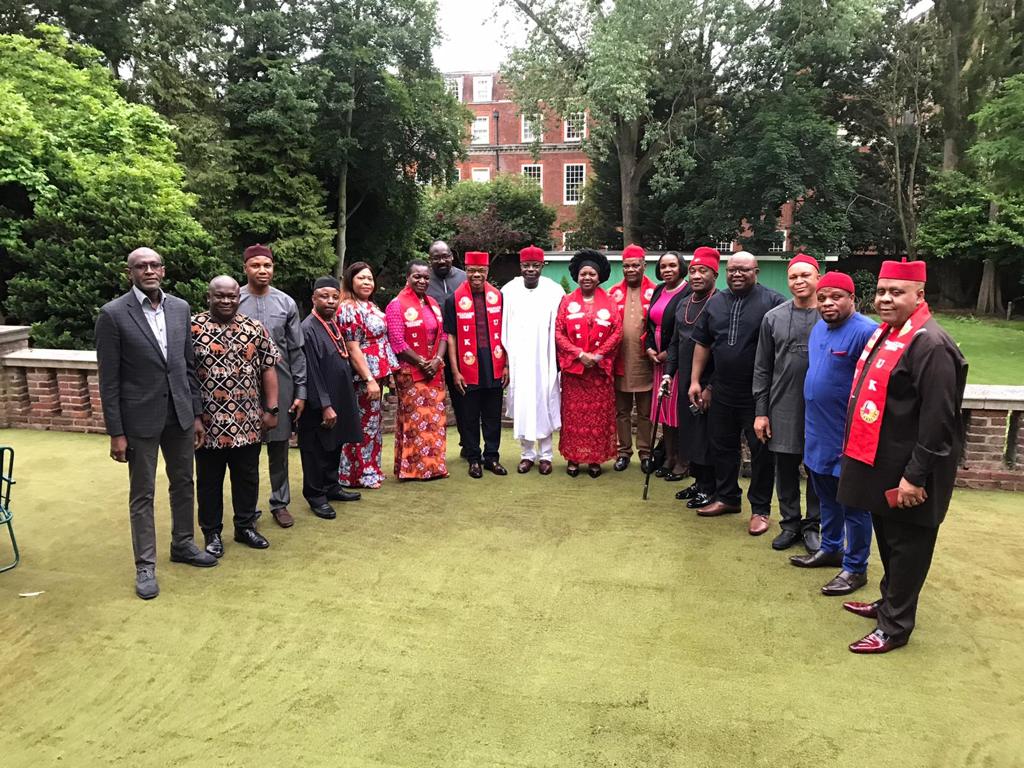 Leaders Of Ndigbo Community UK Meet and Greet with With The New Nigeria High Commissioner Amb. Sharaft Isola on Monday at his residence in Abuja House, London.

The group was led by the president of Ohaneze Ndigbo Uk, Dr. Igwe Nnanna, which includes members of Council Igbo Communities UK, Congress of Igbo Leaders UK, and Ogbako Ndigbo Uk, on the visit.

The informal dinner and discussion, featured  the  need for resourceful and productive relationships with the Igbo community in the UK and the high commission prior to the fact that the Ndigobs are increasingly showing frustration, discontent and agitations. This dissatisfaction is fast spreading among the populace who have already been negatively impacted by the adverse economic, social and political consequences of the administration.

In attendance were also the presence of the Acting Deputy High Commissioner, Head of Welfare, and Head of political sections.

The High Commissioner in his address asked that Nigerians in the diasporas should be careful of humiliating the leaders of Nigeria, and de-marketing the great potentials of Nigeria.

In his response, the president of Ohaneze in the UK, Dr. Igwe, thanked the high commissioner for his warm reception of the Igbo leaders, who are prepared and ever willing to support his time in office as HC of Nigeria in the Uk.

“The igbos are peace loving group of people, who have sacrificed so much for the growth and survival of Nigeria, since after the civil war'” he reaffirmed , mentioning  that the current insecurity challenges facing the Igbo people in the south east is quite appalling. He blamed  the  president who has not found right to visit the concerned affected areas in the SE, and even calling for a positive and true dialogue with the people ever since the  recent happenings.

The  Ndigbo in the United Kingdom and not happy with the various premeditated killings in the SE, and war threats across the country. Hence, he called  for a strong demand for a constructive dialogue with the concerned people of SE, the leaders of thoughts, and the agitating groups for a mutual resolution.

“Nigeria stands on a tripod from independence and at the moment one of the tripod has been disenfranchised, resulting to the shaky situation of the country and its future. We want a Nigeria where  there is peace, equity, justice, and fairness, for a United people, in diversity.”

The High Commissioner saluted the president of Ohaneze, for his Openness and fair view, and welcomed his demands. There were various contributions from the Igbo community leaders delegation, as well as members of the the diplomatic mission, on ways of enhancing better working relationships with the community and the mission.

On his closing remarks, the High commissioner, while appreciating the comments and contributions of those who spoke, assured everyone of a steady improvement on the embassy services to the Nigerian community, with regards to the passports services and Consullar services too. He welcomed few members who volunteered their time and services on a Pro Bono basis to support the mission and thanked everyone for make out time to attend the meeting, promisimg  that this is going to be a regular consultation with the Igbo community leaders.

QATAR AND THE INTOLERANCE OF NAYSAYERS