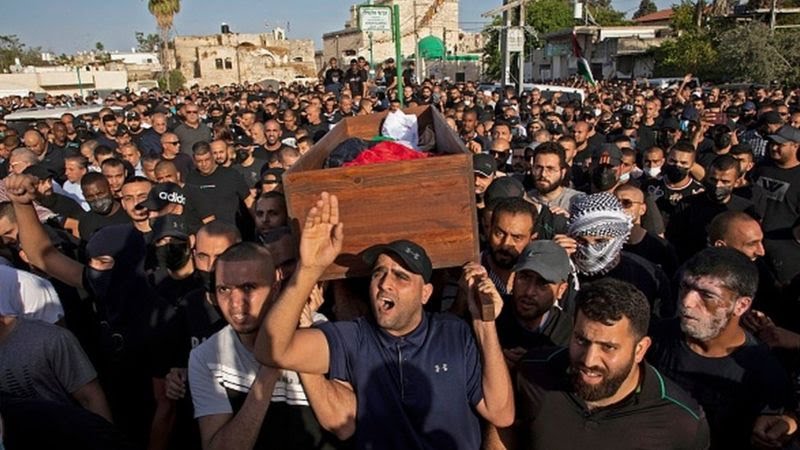 The most unexpected developments played out on the streets of Israeli cities and towns, as rival Jewish and Arab mobs attacked people, cars, shops, offices and hotels. This war continues to escalate as the world is calling on Israel and Palestine on the appalling Issue.

Recall that a new front opened in the military showdown between the Israeli Army and Palestinian militants in Gaza on Wednesday as a wave of mob violence between Jews and Arabs spread across several Israeli cities, leading to riots and attacks in the streets as rockets and missiles streaked across the sky.

The unrest has shifted the Palestinian conflict to world attention after several years in which attempts to resolve it had faded from both the global and domestic agenda.

Israel said it assassinated 10 senior militants and continued to pound both military and residential areas across the Gaza Strip with airstrikes, while Hamas, the Islamist group that rules Gaza, and its allies continued to fire rockets into civilian areas across central and southern Israel.More than 1,000 rockets had been fired from Gaza by Wednesday night, most of them intercepted by an antimissile defense system, the Israeli military said.

More than 67 Palestinians, including 16 children, have died since the start of the conflict on Monday, Palestinian health officials said. The rockets fired by Hamas and its Islamist ally, Islamic Jihad, killed at least six Israeli civilians, including a 5-year-old boy and one the air.

For years, leaders warned that a failure to resolve the Israeli-Palestinian conflict might eventually lead to fighting within the state of Israel itself, said Tzipi Livni, a veteran former cabinet minister and former chief negotiator in peace talks with the Palestinians.

What set off the latest violence?

The Daily explains.“And this is exactly what is happening now,” she said. “What was maybe under the surface has now exploded, and created a combination that is really horrific”.

For weeks, ethnic tensions had been rising in Jerusalem, the center of the conflict. In April, far-right Jews marched through the city center, chanting “Death to Arabs,” and mobs of both Jews and Arabs attacked each other.

Palestinian anger increased as a deadline to expel several families from their homes in Sheikh Jarrah, East Jerusalem, approached — a case that quickly became a stand-in for historic expulsions of Palestinians from land in Israeli .

Dozens of people have been killed in Gaza and Israel since violence escalated on May 10. The current offensive is the heaviest between Israel and Hamas since a 2014 war in the Hamas-ruled region. Given the current situation, there is pressure on the US to de-escalate the tension as concerns are growing that the situation could spiral out of control. Meanwhile, Prime Minister Benjamin Netanyahu says Israel will use “an iron fist if needed” to stop widespread protests by Arab citizens that have resulted in injuries, arrests, and property damage.