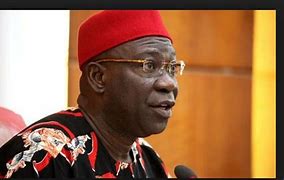 Joining calls for state police, a former Deputy President of the Senate, Ike Ekweremadu, said in Lagos on Monday that Nigeria’s policing system had failed to tackle insecurity.

Speaking on “Nigerian State and the Call for Restructuring’’ at the opening of Law Week 2021 of the Ikeja branch of the Nigerian Bar Association, Ekweremadu called for the decentralisation of the police.

The Week has “The Nigeria of Our Dreams’’ as its theme.

Ekweremadu said the decentralisation of the police had become expedient in the face of the rising wave of banditry and kidnapping across the country.

“Our policing system has failed woefully. There are no other federating states that have done what we are doing in policing.

“It is no surprise that with the capsizing of the national police, the nation’s security has also collapsed,’’ he said.

Ekweremadu said that restructuring the police was no longer a matter of choice but a matter of urgency.

(Exclusive) Electronic Transmission: What Actually Transpired on the Floor of the Senate