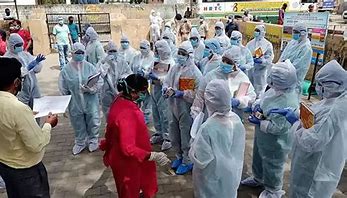 The number of excess deaths in India during the Covid-19 pandemic could be 10 times higher than the official death toll, according to a study that estimates that between 3 million and 4.7 million more people died than would be expected between January 2020 and June 2021.

The study, carried out by the US based Centre for Global Development, examined three different sources of data to piece together one of the most comprehensive pictures yet of the pandemic in India.

“India’s official Covid death count as of end-June 2021 is 400,000,” the report says. “The reality is, of course, catastrophically worse … What is tragically clear is that too many people, in the millions rather than hundreds of thousands, may have died.”

Excess deaths are a calculation of how many more people are dying across a defined period of time than usual. While not all excess deaths that occurred during the pandemic would be due to Covid, it is likely that a significant proportion were.

The report acknowledges that establishing an accurate Covid-19 death toll may “prove elusive”, but that such a toll “is likely to be an order of magnitude greater than the official count”.

India’s second wave, which hit in March, was the most devastating. People died in the streets and outside hospital gates unable to get a bed or oxygen, and the healthcare system was brought to the brink of collapse.

However, using the data, the researchers concluded that the first wave “was also more lethal than is widely believed” and that about 2 million people may have died in the first wave alone.

Arvind Subramanian, one of the authors of the report, said: “After the first wave, which was more spread out, there was a sense that India had escaped the worst because there was this undercounting of deaths, and that led to a culture of complacency. But in the second wave, with all the horrendous images that we saw, that really galvanised Indian society to get to the bottom of the numbers.

“Much of this is thanks to the heroic efforts of Indian journalists and civil society who tirelessly and furiously recorded deaths and forced state governments to release accurate data and revise their figures.”

State governments and local administrations across India have been accused of purposefully undercounting Covid-19 deaths, while the stigma attached to the virus also prevented many people getting tested, so many deaths also went unrecorded as Covid-19 fatalities. Following public pressure and calls for accountability, several Indian states have recently revised their Covid-19 mortality figures, leading to a sharp increase in the official death toll.

In order to draw together a more accurate picture than that reflected in official figures, the researchers used three data sources: data from the civil registration system that records births and deaths across seven states, blood tests showing the prevalence of the virus in India alongside global Covid-19 fatality rates, and an economic survey of nearly 900,000 people done three times a year.

The conclusions drawn from comparing the data undermine India’s claim to have one of the world’s lowest deaths per capita. Using official statistics, India’s per capita death rathe is 0.3, compared with 2 for countries such as the UK, US and Brazil, where infection rates are lower. “This shows that India was not an outlier when it came to Covid mortality,” Subramania said.

Subramanian emphasised that all three data sources used in the report have “merits and shortcomings”, but said they all depicted a relatively similar pattern for excess deaths. He also emphasised that the data sources only went up to May, so the full impact of the second wave that has continued into June and July would not be reflected.

“Knowing the true death toll of the pandemic is important for so many reasons,” Subramanian said. “How can we have a basic understanding of the impact of Covid without knowing how many people died and where they died? Accurate data is the only way we can prepare a fully fledged response to the pandemic in the future.”