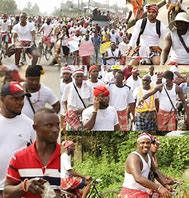 Agreed, Wike has the right to hold any view so far as it is within the ambit of the law and not counter-productive. He can define himself in any manner he deems fit. But he is not in anyway speaking for us(Ikwerre people).

It is important to state for record purposes that historically Ikwerres fully identified themselves as Igbos without suffering harms. Chief Joseph Wobo, member of the Council of Chiefs of Eastern Nigeria, clearly stated he was an Igbo. Nobody can dismiss him as he defended Ikwerreland in colonial Nigeria

Sir Jackson Mpi, first and last Ikwerre to be conferred with Knight of the Order of British Empire, OBE, by Queen Elizabeth II of England in 1960, identified himself as Igbo. From the ancient Kingdom of Isiokpo, Sir Mpi worked tirelessly for Igbo advancement.

Dr Obi Wali was the first Ikwerre PhD holder, senator and university lecturer. He was also the only Ikwerre in the 1978 Constituent Assembly where he was selected one of the 50 Wise Men that drafted the 1979 constitution. The great Dr Wali identified fully with his Igbo heritage and was gruesomely assassinated defending it.

Okogbule Wonodi, first Ikwerre registrar of any university, first and only Ikwerre poet and Paramount title Holder of Eze Ohiaemeru. Ohiaemeru, where you have present-day Comprehensive College in Borokiri, was his ancestral home before the British vacated them between 1913-1923. Wonodi remained a respected member of Nzukor Igbo and Ohanaeze Ndigbo till the end of his life.

Patriot Emmanuel Aguma was former Mayor of Port Harcourt. As Principal of St John College, Diobu, he was the first Ikwerre to head any college. One of six pre-independence Ikwerre University graduates, former administrator of Port Harcourt Province in the defunct Peoples Republic of Biafra, first Ikwere minister in 1979, Aguma remained a member of Ohanaeze Ndigbo.

Emmanuel Oriji was a respected local government administrator, traditional ruler, a commissioner in old Rivers and core Igbo nationalist. The immediate past Deputy Secretary-General of Ohanaeze Ndigbo, Chief Isaac Wonwu, is an illustrious Ikwerre son from Elele. He is known to assert his Igbo identity. Equally valid, Chief Jackson Womenazu from Rumukrushi in the Evo Kingdom is a member of the Elders’ Council of Ohanaeze Ndigbo.

In colonial documents, written when Igbos had no capacity to influence anything, Ikwerres also defined themselves as Igbos. When Ikwerre leaders presented their case before the 1957 Sir Henry Willinks Commission, Wobo declared that Ikwerres were Igbos and Port Harcourt to Onitsha was Igboland.

The cream of Ikwerreland have asserted their Igboness. Most illustrious sons and daughters. Tell me any Ikwerre whose CV can match those of Mpi, Wobo, Aguma, Wonodi, Dr Wali or Amaechi?

We must resolve all outstanding issues occasioned by the military-inspired partition of Ikwerreland as war booty. Our irreducible stand includes:

One, Ikwerres are Igbos and Ikwerreland is so important to the Igbo that they will never take any step to destroy Ikwerres or toy with their destiny. In geo-strategic terms, Ikwerreland is the tongue of the Igbo race to the sea.

Two, we are aware there are plans to landlock the Igbo nation. These plans are rooted in history. My brother and personal friend, Wike, should not be a crusader for such plans because it will be resisted with the sword as no nation will allow itself to be landlocked. All legitimate, moral and spiritual means available to Ndigbo would be used to resist the excise of Ikwerreland from the larger Igboland.

Three, “Obigbo,” means “Heart of Igboland.” It is the right name for that Local Government Area, LGA. “Oyigbo” means nothing and was never and will never be the name of Obigbo. The British met local people on ground who said their world was called Obigbo. Any researcher can go there and verify for himself. None should be persecuted for calling Obigbo its original pre-civil war name. I, Uche Okwukwu, call it Obigbo and I have no apologies for that.

Five, demographically and historically, Igbos constitute the majority in the Niger Delta. Wike’s idea of the region is flawed considering that nine states make up the Niger Delta Development Commission, NDDC, namely, Imo, Abia, Delta, Bayelsa, Akwa Ibom, Cross River, Edo, Ondo and Rivers. It is absurd and unacceptable stating that Umuagwo is not in the Niger Delta but Ogoja is. Be that as it may, there is now a statutory definition of the region manifest in the NDDC Act.

Any definition that excludes the Igbo from the Niger Delta, or tends to disenfranchise them from the privileges thereof, is unacceptable. This is because there were plans in the past that destroyed any benefit coming to the Igbo. Boundary adjustments were carried out to remove oil-producing areas from the former East Central State.

Six, in terms of ethnicity and language, Igbos are also in the majority in Rivers. It is fallacious that there are no Igbos here. Igbos are here because Ikwerres are Igbos. Ogbas are Igbos, Ekpeyes are Igbos. Etches are Igbos. Obigbos are Igbos. So no one can talk about Igbos coming in to cause trouble. Igbos are peaceful. Rivers is our home, and we are its autochthones.

Seven, Binis have no cultural or historical link with Ikwerres. We worship different gods, have different market days with different monarchical structures. Our Kingship is not from father to son like the Binis. Our kingship is based on gerontocracy where the oldest person assumes leadership. What brought us together was the 1914 amalgamation. No pre-colonial or colonial record has it that Ikwerres migrated from Benin. The post-war purported claim that Ikwerres are Binis is parasitic, defeatist and self-hate.

Wike is an illustrious Ikwerre son. And for emphasis, he is an Igbo man. A kettle might call itself an electric kettle, but it remains a kettle. Wike will do himself great service to forget the purported prejudice of the past and assert his Igboness. You don’t deny your own roots because they may not be there anymore when later you need them. All those who deny their people have always regretted it.

Was Wike not doing an overkill saying that an Igbo son desirous to be president was claiming to be Igbo? My real pain concerning Wike’s outburst last year is why he chose these trying moments when some mischievous Nigerians lumped Ndigbo with IPOB. It is frightening and I would like to know who is writing the script for him.