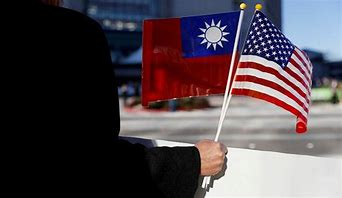 China reacted with fury on Wednesday to a visit by a delegation of US lawmakers to Taiwan, as tensions between Beijing and Taipei reach their highest in years.

China claims self-ruled Taiwan as its territory and has vowed to retake it by force if necessary, with the democratic island living under the constant threat of invasion from its increasingly belligerent neighbour.

Taiwan’s foreign ministry confirmed the visit was arranged by the American Institute in Taiwan — Washington’s de facto embassy on the island — and said it would provide “necessary administrative assistance”.

Beijing responded by saying the “risky and provocative actions” are “doomed to end in failure”.

“Colluding with Taiwan independence forces is a dangerous game and playing with fire will result in burning themselves,” said foreign ministry spokesman Wang Wenbin at a press briefing, calling the visit a “clumsy performance”.

Few details about the trip have been made public so far.

Pentagon spokesman John F. Kirby confirmed at an informal briefing Tuesday that the members of Congress travelled to Taiwan by military jet, which he said is customary for travel of this kind.

“Kirby noted that congressional visits to Taiwan are relatively common and in keeping with US obligations under the Taiwan Relations Act,” the US Department of Defense said in an online statement.

The vast majority of countries recognise Beijing over Taipei diplomatically under the “one China policy”.

But a growing number of unofficial diplomatic visits have taken place between Taiwanese, European and American officials in recent months as the island tries to shore up international support.

Since her election in 2016, President Tsai Ing-wen has tried to assert the island’s distinct identity, provoking China’s anger and its attempts to isolate Taiwan diplomatically.

Beijing has ramped up military activities near Taiwan in recent years, with a record number of planes intruding into the island’s air defence identification zone in early October.

The Chinese army said on Tuesday it had recently conducted a “war-readiness patrol” in the Taiwan Strait.