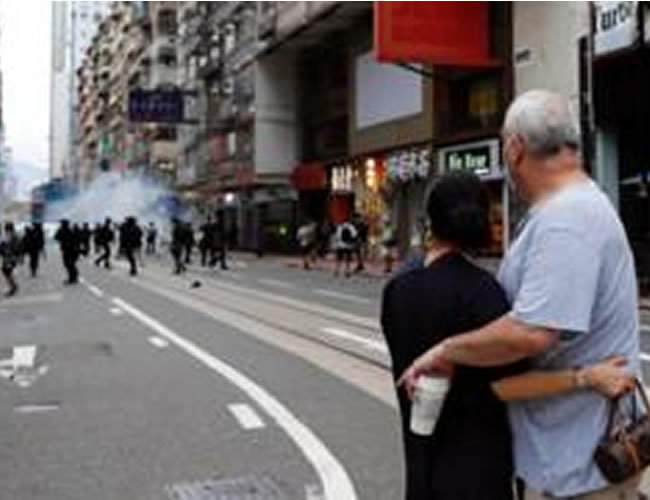 China has introduced a new national security law for Hong Kong. The BBC’s Michael Bristow takes a closer look at the detail, and what it will mean in practice.

It introduces new crimes with severe penalties – up to life in prison – and allows mainland security personnel to legally operate in Hong Kong with impunity.

The legislation gives Beijing extensive powers it has never had before to shape life in the territory far beyond the legal system.

Analysis of the law by NPC Observer, a team of legal experts from the United States and Hong Kong, identified what they consider a number of worrying aspects.

“Its criminal provisions are worded in such a broad manner as to encompass a swath of what has so far been considered protected speech,” said a posting on its website.

Article 29 is perhaps an example of this broad wording.

It states that anyone who conspires with foreigners to provoke “hatred” of the Chinese government, or the authorities in Hong Kong, could have committed a criminal offence.

Does that include criticism of China’s governing Communist Party?

On Wednesday at a media briefing, Hong Kong’s Justice Secretary Teresa Cheng was asked to define exactly what the provision means. She was unable to give a clear answer.

It gives Chinese mainland security operatives the right to investigate some national security cases that are “complex”, “serious” or “difficult”.

As the NPC Observer team note, these words are “highly subjective and malleable”.

Human rights organisations have pointed out how the law seems to undermine protections previously offered to defendants. Image copyright EPA Image caption Many are worried about what the law may mean for people in Hong Kong – and elsewhere

Trials can be held in secret (Article 41) and without a jury (Article 46). Judges can be handpicked (Article 44) by Hong Kong’s chief executive, who is answerable directly to Beijing.

The law also reverses a presumption that suspects will be granted bail (Article 42).

That same provision also appears to suggest there is no time limit on how long suspects can be held. It says only that cases should be handled in a “timely manner”.

Entire cases – from investigation to judgement to punishment – can be simply handed over to the mainland authorities (Article 56).

Foreign nationals outside of Hong Kong face prosecution under the law (Article 38).

Donald Clarke, writing for the China Collection, a blog focusing on Chinese issues, wrote that a US newspaper columnist advocating Tibetan independence might fall foul of the law.

“If you’ve ever said anything that might offend the PRC (People’s Republic of China) or Hong Kong authorities, stay out of Hong Kong,” he wrote.

Mr Clarke, of the George Washington University Law School, said the biggest worry was the institutions and processes that the law has established.

Article 60 makes it clear that anyone who works there does not have to abide by Hong Kong’s laws. They shall not be subject to “inspection, search or detention”.

Claudia Mo, an opposition lawmaker in Hong Kong, said the aim of China’s national security legislation was to “stun Hong Kong into nothingness”.

“People will be so petrified, so frightened and intimidated, that they wouldn’t dare say anything or do anything in opposition,” she said.

Of course, that is not the view in Beijing.

Zhang Xiaoming, of China’s Hong Kong and Macau Affairs Office, said on Wednesday that the law would help return stability to the territory.

It will bring Hong Kong more in line with the laws, procedures and practices of mainland China.

Whether or not you think the legislation was necessary, it is impossible to deny its significance. As Hong Kong’s leader Carrie Lam put it: this is a turning point.