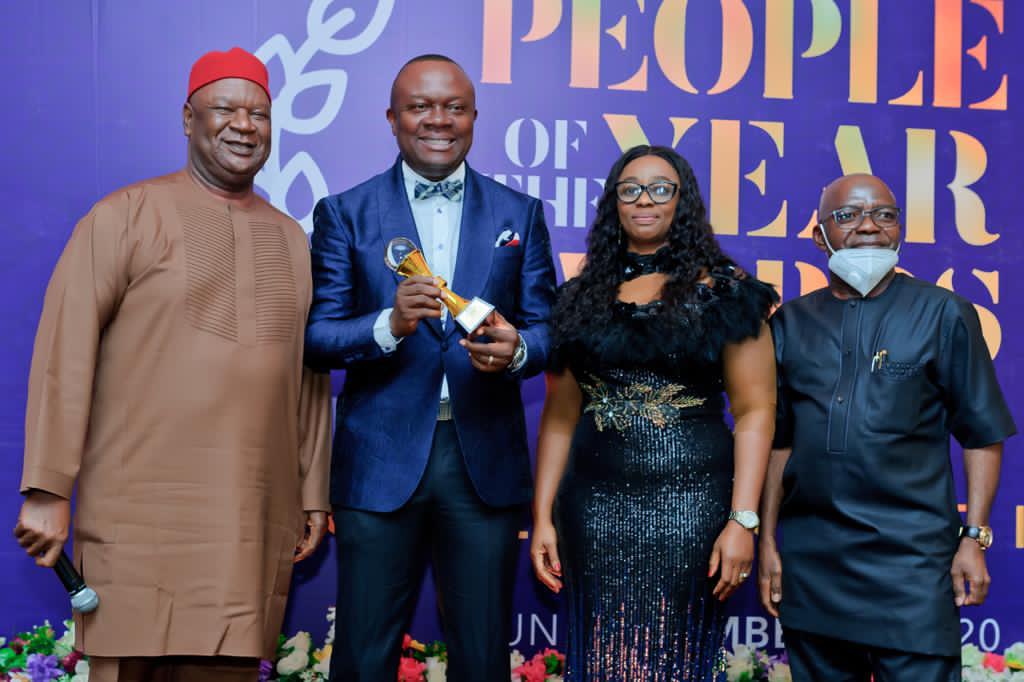 Valentine Ozigbo, the immediate past President and Group CEO of Transcorp Plc was on Sunday, November 22, 2020 named as a recipient of the Outstanding Achievement in Transformational Leadership Award at the 2020 edition of the People of the Year Awards.

The People of the Year Award is an annual event organized by Business Hallmark Group, publishers of Hallmark Newspapers, with awards given to individuals who have exhibited uncommon enterprise, leadership, and excellence. The 2020 edition was held at Civic Centre, Victoria Island, Lagos.

The chairman of the occasion, Senator Anyim Pius Anyim, who is a former Senate President and a former Secretary to the Government of the Federation and Dr Alex Otti, a former managing director of Diamond Bank, presented the award to Ozigbo.

Senator Anyim congratulated the respected business leader and wished him well in his future endeavours. He had glowing words for Ozigbo affirming his confidence in his transformational leadership abilities describing him as “the kind of man that is needed to fill the leadership void in the country”.

In his acceptance speech, an elated Ozigbo revealed that being so honoured gave him a sense of validation, mostly as he was aware of the reputation of Business Hallmark and the scrutiny that award recipients usually go through.

The respected business leader expressed gratitude to his wife, Ojiugo and his family who have been massive pillars of support. He also thanked former colleagues, business mentors, and his allies who have been a part of his eventful journey through life.

Ozigbo, who is a leading governorship aspirant in the forthcoming Anambra State elections, spoke briefly about his recent decision to quit his role at Transcorp Plc. He said he decided to resign from the top of the corporate ladder to dedicate the next chapter of his life to public service.

According to the philanthropist and founder of the Valentine Chineto Ozigbo Foundation, he is presenting himself to the people of his state so they could achieve the greatness they have always yearned for.

“I am stepping out into an arena which many regard as ‘the murky waters’ and many people close to me are perplexed why I would leave a plush job for politics. My answer is that I am pulled by the belief that Nigeria is a great country and we need to close the leadership gap to actualise our dreams urgently,” he declared.

”I believe I have the leadership content needed to bring a positive transformation to my people, and that is why I am running for the office of Governor in 2021. This award encourages me and tells me I am on the right path. So I am grateful,” Ozigbo added.