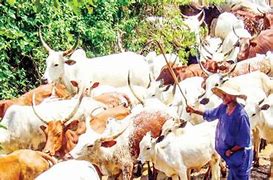 Fellow Nigerians, following President Buhari’s decision to reclaim all officially gazetted grazing reserves/routes, I decided to conduct my own findings as to where exactly these gazzeted cattle routes are located. What I found was rather interesting and I will present it here for the purpose of enlightening the public.

My research focused only on the gazzeted cattle routes as that was what PMB said he would reclaim.

There are 140 gazetted grazing reserves

I am not very sure PMB is aware of this distribution. He may be aware that there are gazzeted grazing reserves, but if he now discovers that what is officially gazzeted does not even include almost the entire south, I am not sure he will still pursue the agenda of reclaiming these reserves.

I also found out that as far back as the time these reserves were created, the committee recommended the adoption of a more sedentary method of cattle rearing or ranching. In a paper written by S.A. Ingawa, C. Tarawali and R. von Kaufmann, ILCA Subhumid Research Site(1989) the authors listed some of the problems with open grazing of cattle and the need to implement a solution that is both beneficial to the pastoralists and the farmers.

The research is an eye opener and also a deep revelation as to how government can indeed resolve any problem if they intend to, with honesty and fairness.