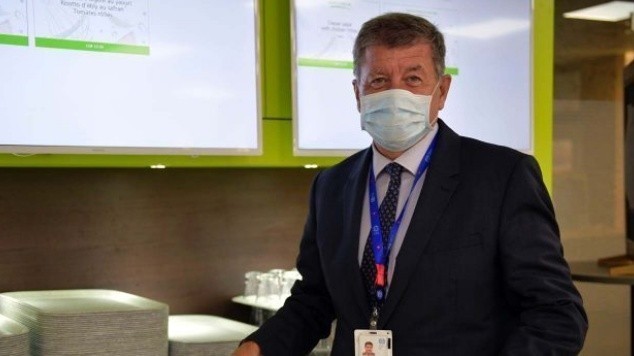 Unless the world adopts universal availability of COVID-19 vaccines by ending ‘vaccine apartheid’, the global economic recovery will be much slower than expected, Director-General of the International Labour Organisation (ILO), Guy Ryder, has said in an exclusive interview with The Guardian, yesterday.

Ryder, who spoke from his Geneva, Switzerland office, heads to Rome, Italy, today, to attend the G20 summit, which holds from October 30 to 31. He said ILO will preach the gospel of ‘vaccine justice’ to draw the attention of the global leaders to the danger lack of vaccine poses to the rest of the world.

“ILO will certainly be advocating in favour of universal access on equitable basis to vaccine regardless of economic possibilities and economic needs of the people concerned. So, our job is to speak in favour of what is called ‘vaccine justice’.

“We will be advocating that the first and second jabs be made available in all countries of the world before we go to booster jab because that is not what the world should be aiming at.”

This is as new analysis reveals G20 countries have received 15 times more COVID-19 vaccine doses per capita than countries in sub-Saharan Africa.

The analysis, conducted by science analytics company, Airfinity, exposes the severity of vaccine inequity between high-income and low-income countries, especially in Africa.

While individuals reserve the right to take or decline taking the vaccine, Ryder stated that the ILO strongly encourages people to take the jabs to protect themselves and their families.

The Director-General of the global labour watch body noted that as the world opens its doors to visitors for work and tourism, there is need for adoption of a standardised globally accepted vaccination certificate to halt vaccine discrimination rocking the aviation industry.

“As we know, tourism is one of the sectors that is mostly affected by the pandemic. To help people to travel and provide safety, negative tests of the virus are demanded at airports and approval of vaccination and certificate. I am travelling to Italy tomorrow, I have done my test and must also provide vaccination passport at the airport before I travel otherwise, I cannot move.

“Though some people might have negative views about vaccination passport or vaccination certificate, this is becoming a pre-condition for international travels at the moment. I think what is more important is not to make the process discriminatory.”

According to him, beneath the discrimination, is the absence of vaccines, especially, in the developing nations of the world. He submitted that tackling vaccine shortage will end discrimination, adding, “the problem of discrimination is real. If one lives in a country where vaccination is not easily available, then it might be difficult for people to travel with vaccination passport because there is no vaccination.

“The second problem we need to overcome is the harmonisation of vaccination certificates. Different countries, different authorities have different documentations and not literally recognisable one from the other. I think to make the system work better, we need to harmonise and literally recognise the vaccination certificates.”

This comes as the global economy is stalling and signs of early economic recovery occasioned by COVID-19 is waning amid significant disparities between advanced and developing economies.

Latest findings in the study tagged: ‘COVID-19: ILO Monitor – 8th edition’, indicate that the loss of working hours in 2021 as a result of the pandemic will be significantly higher than previously estimated, as a two-speed recovery between developed and developing nations threatens the global economy as a whole.

The pandemic-induced loss in working hours in 2021 will be equivalent to 125 million full-time jobs, the body stated, yesterday, in a sign that the global labour market is not recovering as expected this year. The number is 25 million more than ILO predicted in its previous report in June, which is primarily affected by inequalities in vaccine rollouts among poor and wealthy countries.

The number of working hours globally is down 4.3 per cent from pre-pandemic levels, equivalent of 125 million full time jobs. This is a dramatic revision of the projection made in June, of 3.5 per cent or 100 million full-time jobs.

However, when that figure is calculated based on countries’ income levels, there is a difference of 2.1 percentage points: richer countries only saw a 3.6 per cent loss, compared to 5.7 per cent for poorer countries.

ILO said economic stimulus packages were also responsible for inequalities between countries, adding that low-income countries could fill that gap in just a quarter if they were given more equitable access to vaccines.

The accelerating vaccine rollout in early 2021 slightly softened the shock of lost work hours. ILO uses working hours instead of unemployment rates, for example, in an attempt to compare how the coronavirus pandemic has affected the labour market globally in light of differing definitions of employment within each country.

Globally, losses in hours worked – in the absence of any vaccines – would have stood at six per cent in the second quarter of 2021, rather than the 4.8 per cent recorded.

AHEAD of the G20 leaders’ summit this weekend, 48 UNICEF Africa ambassadors are calling on countries to deliver more doses and end vaccine inequality by December.

“Vaccine inequity is not just holding the poorest countries back, it is holding the world back,” said UNICEF Executive Director Henrietta Fore.

“As leaders meet to set priorities for the next phase of the COVID-19 response, it is vital they remember that, in the COVID vaccine race, we either win together, or we lose together.”

Wealthy countries with more supplies than they need have generously pledged to donate these doses to low- and middle-income countries via COVID-19 Vaccines Global Access (COVAX) but these promised doses are moving too slowly. Of the 1.3 billion additional doses countries have pledged to donate, only 194 million doses have been provided to COVAX.

African countries in particular have largely been left without access to COVID-19 vaccines. Less than five per cent of the African population is fully vaccinated, leaving many countries at high-risk of further outbreaks.

Signatories to the open letter by the UNICEF Africa ambassadors include Angelique Kidjo, Arlo Parks, Davido, Tendai Mtawarira, Femi Kuti, Tony Elumelu, Ramla Ali, Winnie Byanyima among others. They are calling on leaders to donate the pledged vaccines by December, along with the necessary resources to turn the vaccines into vaccinations.

ALSO, African leaders have been told to pressure G20 to stop ‘vaccines apartheid’. In a statement yesterday, the Bureau Chief, Africa for AIDS Healthcare Foundation (AHF), Dr Penninah Iutung, said the time has come for African leaders to amplify their voices in a combined effort to demand that G20 leaders prioritise global vaccine access for the majority of nations that desperately want to vaccinate their populations.

“That must start with pushing pharmaceutical companies to share their know-how and technology to increase production in Africa and globally. Africa can no longer wait for vaccine charity, it is time to get rid of patent monopolies for successful vaccines against coronavirus, whose development was supported by $100 billion in public funding from taxpayers in the U.S., Germany, and other countries.

“Taxpayers were the primary funders of COVID-19 vaccine research, development, and production – the world owns that intellectual property, not the drug companies that continue to profit from the pandemic.”

As of early October 2021, 6.92 billion COVID-19 vaccine doses had been administered globally, with 78 per cent of those going to people in high-and upper-middle-income countries. Less than seven per cent of the 1.3 billion people on the African continent have received even one dose. The discrepancy is worse for people in low-income countries where less than one per cent have got a shot.

“It’s no surprise that there are not enough doses to vaccinate our world when wealthy countries have secured enough vaccines to inoculate their populations as much as five times over, according to Duke University. Even though the world will have created 11 billion total doses by the end of this year, almost 9.9 billion of those have already been promised to wealthy nations.

“The global COVID-19 response has been abysmal since the start, but African leaders have the opportunity to rally together and speak as a united force for the good of all Africans and the world. If one nation is under threat from COVID-19 with no access to vaccines, all nations are in danger. The G20 leaders must acknowledge that reality and act accordingly. The fate of the world is in their hands at the upcoming Summit— by ensuring vaccine equity, we will be protecting the entire world.”

ADDING its voice, Amnesty International said G20 leaders meeting in Rome must put aside greed and selfishness and ensure the fair global distribution of Covid-19 vaccines.

Agnès Callamard, Secretary General of Amnesty International, said: “Last November, leaders of the world’s 20 biggest economies held their annual G20 summit online, with a focus on ensuring COVID-19 vaccines would be made available to everyone. However, one year on, the most powerful countries have failed to protect the lives of millions of people, choosing to hoard vaccines, resulting in a predictable and utterly devastating vaccine scarcity for the rest of the world. Rich countries are sitting on an estimated 500 million doses right now.”

On September 22, 2021, Amnesty International launched a global campaign to demand that the World Health Organisation’s target of vaccinating 40 per cent of the population of low and lower-middle income countries is met by the end of the year.

“While some countries have pledged to redistribute vaccines, many still haven’t provided a clear timeline– with some only committing to share vaccines by September next year,” said Callamard.

“Vaccines must be shared now. It’s in the best interests of everyone, especially if we want to ensure borders can reopen and our global economy can recover in a fair way. The clock is ticking. It’s time to take action now.”

Insecurity In Nigeria Is On The Decline – Buhari