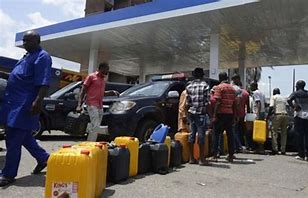 There are indications that the price of Premium Motor Spirit (PMS) may hit N320 per litre later this month as the Federal Government has concluded plans to remove subsidy on the product as part of the ongoing implementation of the Petroleum Industry Act (PIA).

It has been gathered that the skyrocketing oil price, expected to hit $100 per barrel before the end of this year, will also push prices of petroleum products to a record high and worsen the spike in price of Liquefied Petroleum Gas (LPG).

The Nigerian National Petroleum Corporation (NNPC) had last week disclosed that it spent a total of N905.27 billion on petrol subsidy in eight months amid rising global oil prices.

With the international oil benchmark, Brent crude, at $82.39 per barrel yesterday, the landing cost of imported petrol is expected to increase, jacking up pump price of petrol.

The price of diesel has already skyrocketed to N350 per litre, an indication that may further worsen plight of local manufacturers and businesses, which largely rely on the product for power generation in the face of erratic power supply in the country.

Amid plan to increase electricity tariff as part of the implementation of the Multi-Year Tariff Order (MYTO), most stakeholders, who spoke with The Guardian, yesterday, feared increase in prices of goods and services, high inflation, foreign exchange challenges as well as poverty surge.

While President Muhammadu Buhari presented a borrowing dependent budget of N16.39 trillion to the joint session of the National Assembly last week, the current global energy crisis would have been a bumper harvest for oil and gas dependent countries like Nigeria, as current price increase already created a windfall of over $1 trillion revenue for international oil companies, but the lack of local refining capacity meant that import of products (aviation fuel, PMS, diesel, LPG and others) would erode projected gains.

While over N1.2 trillion has reportedly been expended on petrol subsidy alone since the Federal Government brought back the scheme through the back door despite no budgetary allocation in the 2021 budget, the current move to remove the opaque scheme may provide more money for budget implementation, but may worsen consumers’ plight.

The Federal Government had in March 2020 removed petrol subsidy after reducing the pump price of the product to N125 per litre from N145 following the sharp drop in crude oil prices. The NNPC, which has been the sole importer of petrol into the country in recent years, has been bearing the subsidy cost since it resurfaced.

Across key global economies, energy crisis has worsened the economic devastation caused by COVID-19, as worst hit countries like China and others in Europe prepare for a cascading situation ahead of winter.

Although, renewable energy has been on rise, most analysts have expressed pessimistic view whether the emerging option could enable consumers evade spiking bills.

Crude oil, which sold for less than $30 a few months ago, is trading for about $83 per barrel (brent), U.S. crude selling for about $79, trailing Nigerian crude that is exchanging for $82.

At about $83 dollars per barrel, the landing cost of petrol in Nigeria hovers around N290 per litre. Additional charges, including margins for retailers and wholesalers, transporters and equalisation standing at around N60 per litre would push the current pump price to about N350 should subsidy be removed.

While the Federal Government had last year increased electricity bills, there was a further slight adjustment to the tariff in September in the face poor supply.

Unknown to most Nigerians, they are now paying higher for electricity after the authorities quietly raised the tariff without notifying consumers of the product. The two per cent tariff adjustment confirms plans by government to withdraw its subsidy payment in the sector, which is well over N30 billion monthly.

Also, price of LPG, otherwise known as cooking gas, has risen by over 100 per cent in the past few months as 12.5kg is currently selling for between N7,500 and N8,000. This, marketers say might increase to N10,000 before December if the current crisis in the sector is not addressed.

The marketers have expressed concerns over the supply shortage, which is rocking the sector and has led to recent hikes in the price of the commodity, driving more Nigerians to seek alternative sources of fuel like charcoal, firewood, sawdust, among other energy sources whose prices have started rising as well.

Diesel, mainly used as alternative for power generation in the industrial sector and small scale businesses, has equally risen exponentially to about N350 per litre across fuel stations in the country.

Minister of State for Petroleum Resources, Timipre Sylva, had told journalists in Abuja last week that there won’t be an option to full deregulation of the downstream, a move that would increase the current N162 per litre pump price to about N350, which has already been canvassed by the 36 state governors.

This is coming as the NNPC yesterday appealed to tanker drivers to halt proposed plan to embark on strike given poor state of road network as well as increasing cost of diesel and vehicle spare parts.

With the nation’s economy shrinking to historic low in a quarter last year due to the pandemic, the 2022 budget is proposing a growth of 4.2 per cent, which according to Amadi, may now become a tall order as unabating energy crisis would increase costs of production, “which may affect industrial capacity and productivity.

“There will also be negative impacts on small and medium enterprises in terms of escalating their costs of production. Generally, energy cost is about 30 per cent of the cost of production. So, a general increase in energy prices will be a major constraint to economic growth,” he noted.

Amadi noted that increase in electricity tariff remained imminent considering that gas constitutes about 40 per cent of electricity price.

An energy expert, Henry Adigun, noted that while the crisis may persist, the government should go ahead with subsidy removal, insisting that, “there is never a right time to remove energy subsidies. The right time is always yesterday.”

According to him, while the removal may be a difficult decision, the country is already in dilemma as government continues to borrow while losing money on petrol subsidies it could have channelled to other productive sectors.

Adigun said companies are already feeling the pain as inflation remained very high, disclosing that while any price increase would create chaos and spike prices, leading to inflation, it is necessary to take the bitter pill of removing subsidy now if Nigeria will survive tomorrow.

A former management staff at NNPC and Chairman/CEO of the International Energy Services Limited (IESL), Dr Diran Fawibe, noted that the country may have been caught up in energy insecurity, a development that remains debilitating for a country with so much energy resources.

“Nigeria should not be having an energy crisis if we have been managing our resources properly, because we have all it takes to have energy security. For example, we ordinarily should not be importing petroleum products if we have had appropriate policies and initiative, and tenacity of purpose,” Fawibe said.

He insisted that the country must find a way to remove subsidy, which he sees as a major barrier towards improving energy security of the country, otherwise, the nation may have to bear the brunt.

He lamented that the country has been unable to increase crude oil reserves years after setting a 40 billion barrel reserves and four million barrel daily production, adding that inability to think properly equally created the chaotic situation in LPG pricing despite the country’s 206 trillion cubic natural gas resources.

Fawibe decried that the country equally created uncertainties that did not encourage investors to step in and address the country’s energy crisis, adding that with many oil companies now switching from oil to renewable, the country faces a daunting challenge.

With a rapidly growing population and widening energy gap, the energy expert is calling for an urgent action that would create a holistic approach, especially in the area of investment to drive investors locally and internationally.

Fawibe said although the fiscal incentives in the PIA were commendable, government needs to engage investors and listen to experts’ advice, otherwise, the country would be suffering in the midst of plenty.

Former President of Chartered Institute of Bankers of Nigeria (CIBN), Prof. Segun Ajibola, noted that prevailing global energy situation would impact Nigeria negatively given the country’s dependence on import for the goods it ought to be exporting.

“We should be rejoicing if prices are high but there is a disconnect because we are importing. It is sad for us to pay more for the same products we have in abundance,” he stated.

“There will be cost-push inflation. Power is a major cost element in all businesses. They will pass on those costs to consumers. There is already worsening standard of living, this will further be impacted negatively. This is besides the issue of foreign exchange.”

Iledare said: “If you delay making choices and at the end of the delay you made bad choices, you live with the consequences. I hate to say we told you so. The solution is to adjust to the new reality and follow energy economics principles. No shut cut.”

He insisted that keeping energy subsidies is delaying the evil days. Stressing that the worst is yet to come if Nigeria continues “the Esau’s mindset in the governance of the energy sector institutions.”