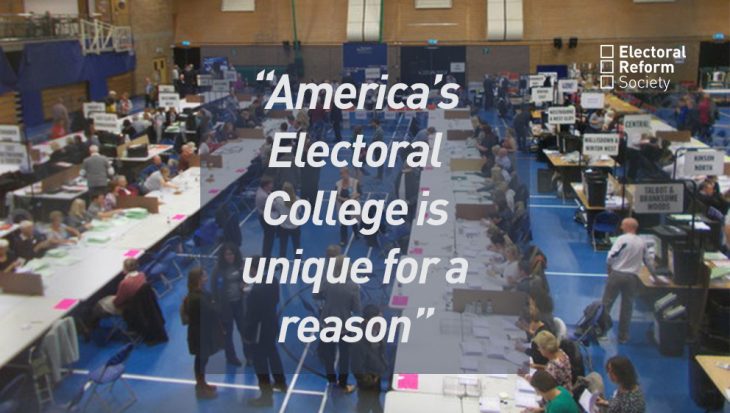 Americans don’t actually vote for the president, they are voting on what to tell a group of ‘electors’. Each state has a set number of electors based on their representation in the US Congress, the votes cast by Americans tell these electors who to vote for when the electoral college elects the president.

Like much of the US constitution, this bizarre system came out of the compromises needed at the time to create a nation out of 13 disparate colonies. Southern states, with massive enslaved populations, didn’t want to be dominated by northern voters. The numbers of electors each state has was also a compromise between the states. Each state gets one elector for each member of the House of Representatives they have, plus one for each senator. As every state has two Senators, irrespective of their population, voters in smaller states have more power to decide the president than voters in larger states.

There is a campaign in America to scrap the electoral college and give the presidency to the popular vote winner. But while that may seem a simple solution, the experience of countries that have a straight first past the post contest for president has been mixed. As we know when using first past the post to elect MPs in the UK, while the loser won’t win, the winner doesn’t need a majority of the vote to win either. In fact, the majority of voters may be opposed to the president.

In the Philippines, their, shall we say, controversial president, Rodrigo Duterte only won 39% of the vote in 2016. In May 1992 Fidel Ramos was elected to be president of the Philippines with only 24 per cent of the popular vote. We’ve ranked first past the post as the second-worst system as…

Getting Better. Two Round System

An easy way to stop candidates winning on less than half the vote is to have a second round of voting with just the top two candidates. France is the most famous country to use a two-round system. The first round of voting is similar to voting in the UK: electors vote for their preferred candidate.

If a candidate gets over half the votes, they are elected. If no candidate receives an overall majority, the second round of voting takes place two weeks later with the top two candidates from the first round.

Two-round systems are widely used around the world.

The problems with having two separate elections can be fixed with some clever ballot paper designs and counting methods.

When they count the ballots, anyone who has 50% of the first votes wins. If nobody gets 50% the person who came last is excluded and the ballots are recounted in a ‘virtual’ second round. If your favourite candidate is still in the race, you still vote for them. If your favourite has been excluded your vote goes to your second choice. This process continues until one candidate gets half the vote.

Badly designed electoral systems shape candidates, campaigns and countries. When extreme candidates can win on minorities of the vote under First Past the Post style systems, there is little incentive to appeal to a broader electorate. Instead, elections just become about snatching slim victories and playing the system. It’s not enough to just vote for better people, we need to stop the systems that let unpopular candidates win.