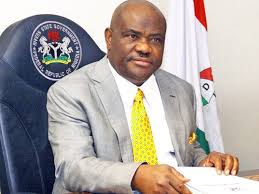 Rivers State Governor, Nyesom Wike, has charged the 23 local government chairmen in the state and youths to fish members of the proscribed Indigenous Peoples Organisation of Biafra in the state.

The governor warned that any council chairman who allows IPOB to hold processions and hoist its flag within their jurisdiction in Rivers State risked sacking.

Wike handed down the warning during a meeting with the council chairmen, Community Development Committees and youths leaders at the Government House, in Port Harcourt on Monday.

The governor, in a statement issued by his Special Assistant on Media, Kelvin Ebiri, described Rivers as the most accommodating state for all Nigerians.

Wike, however, maintained that while the people of Rivers State believe in the unity of the country, they will not allow criminals under the aegis of a terrorist group called IPOB to continue to threaten the stability of the state.

He expressed annoyance that IPOB planned to hoist its flag in Oyigbo.

While calling for vigilance, he warned the IPOB members that Rivers State could not be colonised.

He charged the council bosses, youth leaders, CDCs to go into their various communities and identify all those IPOB members, adding that nobody of Igbo extraction legitimately residing and doing business in the state must be harassed.