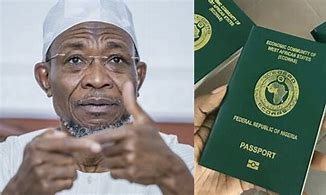 The Minister of Interior, Rauf Aregbesola, on Tuesday, launched the enhanced e-passport at the Nigerian High Commission in London.

He said very soon, all aspects of passport applications, with the exception of biometrics enrolment, would be done online via portals of the Nigeria Immigration Service.

The minister said was to keep abreast with the pace of technology and best practices around the world.

He said with its bicarbonate page and other enhanced security features, “the Nigerian passport is at the highest level of passport security and integrity in the world.

“No nation has a superior passport to that which we’re now offering at Nigeria House.

“Whoever holds a Nigerian passport now must be seen and regarded as Nigerian”.

He said the NIS Service was connected to Interpol and could upload information to the agency on lost, stolen and invalid passports “in real time” to expose impersonators instantly and curb cases associated with the old passport regime.

Acting Comptroller-General, NIS, Isa Jere, said Nigeria was the first country in Africa to have issued e-passports in 2007.

He urged all holders of Nigerian passports to be good ambassadors of the country.

Nigeria’s High Commissioner to the UK, Sarafa Tunji Ishola, said with the launch of the enhanced e-passport, queuing up for passports at the mission would soon end.

ASUU: Salaries of over 1,000 members of ASUU Withheld; Union Threatens to Embark on Industrial Action