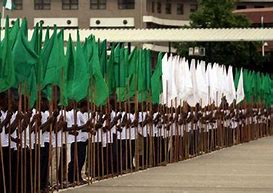 All is not well in the country. Governance has declined to an all-time low. The bizarre is now routinised. Indeed, the German Chancellor, Otto von Bismarck once defined “politics as the art of the possible, the attainable—the art of the next best.” The sense we get is that in the governance process it is possible to find useful solutions to human problems. It is not construed to mean negative governance output; the bizarre spawned by African tin-pot dictators, either of the civilian hue or as a military junta. Unfortunately, in this clime, the Nigerian environment, it comes in the negative; it manifests in the absurd and the unthinkable in a way that defies logic. Those who perpetrate these absurdities in the polity carry on as though nothing is amiss. In the words of the Afrobeat king, Fela Anikulapo-Kuti, they commit, then “clean mouth like say nothing happened.” Indeed they rationalise the irrational.

As it were, the nation woke on August 24, 2021, to learn of the unthinkable, namely, that terrorists, whom the minders euphemistically called bandits, invaded the Nigerian Defence Academy, the country’s foremost military institution, host to many officer corps of African militaries. The thought process continued: the terrorists killed two officers and abducted a third and asking for a ransom of N200 million to free the officer. The confirmatory statement from the military read in part, “The security architecture of the Nigerian Defence Academy was compromised early this morning by unknown gunmen who gained access into the residential area within the Academy…” As we write, the abducted officer has not been freed.

This incident has elicited condemnation from well-meaning Nigerians. For example, the Alliance on Surviving COVID-19 and Beyond (ASCAB) condemned the invasion of the Nigerian Defence Academy and the associated killings by terrorists and noted that “By attacking the military institution, the dangerous criminal elements had wanted to prove that nowhere is safe in Nigeria…To prove the criminals wrong the Federal Government should ensure the immediate release of the abducted officer and proceed to arrest the criminal elements who committed the heinous crimes. No doubt, it is the responsibility of the Government to secure the life and property of every person in Nigeria.”

On his part, Col. Samuel Agbede (rtd), a former president of the Yoruba Council of Elders (YCE), noted that “This attack just signifies that the chicken is coming home to roost. All our calls and cries for proactive actions against insecurity have been confirmed by this worrisome invasion…It is very worrisome that bandits could have the audacity to attack a military academy and kill officers. This has never happened in the history of the military that bandits could have the effrontery to attack a military academy. This is too disgraceful and it is just confirming what we have been saying about the fifth columnist. We have seen why we should not allow those Boko Haram insurgents into the military. It is like putting fire on our thatched roof.” In a manner that points to the restructuring, debate, the urgent need to address insecurity is foregrounded. The retired Colonel stressed that “It is time to look up and gather elders together to do something about this issue. It is dangerous to leave (the) governance of 200 million people in the hands of one man. To say that we have a Major General as our Commander-in-Chief and this is happening is very worrisome.”

Also, the Coalition of Northern Groups (CNG), in its condemnation of the invasion of the NDA noted the failure of the country under the incumbent leadership that runs Nigeria aground to a level where basic conditions and responsibilities of a sovereign government abdicated. However, the presidency responded to the incident in its accustomed rhetorics. The incident, it said, would engender commitment on the part of the military to deal with the armed insurgents holding the nation to ransom.   x

Several reasons responsible for this unfortunate development have been adduced. One is the existence of a fifth columnist or internal collaborators in the defence formation. Two is the dereliction of duty on the part of officers and soldiers in the military formation. Three is the socio-cultural factor. Four, related to the third is the erosion of the secularity of the Nigerian that is relevant to our advocacy for genuine federalism is the invasion of the secular space by religion.

The socio-cultural factor rankles in the current development whereby a military formation is thrown on Fridays to Muslim faithful for prayers in ways that compromise the security of the defence institution. This should cease forthwith. There are many places of worship outside the military formations. Ethno-religious consideration should be taken out of the secular space in which the state is. The present administration has displayed brazen nepotism and religious bigotry whose consequence will be difficult to revise.x

While the nation waits for the outcome of the inquiry into the incident, we hasten to say that the invasion of the secularity of the Nigerian state must be revised in a restructured Nigerian federation. The 1999 Constitution as amended is not deficient in its provision on this matter. Section 10 expressly states that: “The Government of the Federation or of a State shall not adopt any religion as State Religion.” It is further reinforced by Section 38 (1) of the constitution which states inter alia: “Every person shall be entitled to freedom of thought, conscience and religion, including freedom to change his religion or belief, and freedom (either alone or in community with others, and in public or private) to manifest and propagate his religion or belief in worship, teaching, practice and observance.” The secularity of the Nigerian state must be held sacrosanct. Religion should belong to the private realm, which is the spirit and letter of the constitution.

Sadly, we had the obnoxious practice since the Gowon regime when the late General Murtala Mohammed would work out of the Supreme Military Council (SMC) meeting to go and pray while keeping the SMC waiting. This religious inclination has been taken further to the levels of notoriety as governments, state and federal, waste national resources sponsoring pilgrims either to Mecca or Jerusalem. We got it wrong, and this should not be the face of restructured Nigeria. If this country must endure as a united entity, the time for genuine federalism is now.