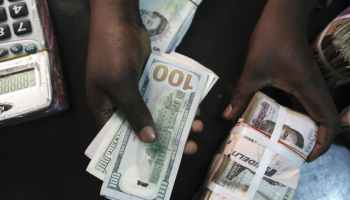 At the parallel market/black market, the naira to dollar exchange rate depreciated and closed at N550 to one dollar compared to N562 the previous day, Wednesday, September 15, 2021.

Nigeria’s local currency has lost a lot of value since the dollar supply to Bureaux De Operators (BDC) was halted by the Central Bank of Nigeria and channeled to commercial banks.

Checks showed that naira dipped to N770/£ against the British pound sterling at the parallel market on Thursday from 760/£1 on Wednesday this week, while the euro depreciated to N655/€ from N648/€ last week.

At the I&E window where naira is traded officially, the naira remained relatively stable, gaining 0.124 percent to close at N413.07/$ on Thursday, according to FMDQ Group.

The group also recorded a daily turnover of $126.96 million yesterday.

The value of the naira has been spiralling downwards since last month when the Central Bank of Nigeria suspended the sales of forex to Bureau De Change (BDCs).

The CBN Governor, Mr Godwin Emefiele, had on July 27, at the end of the Monetary Policy Committee (MPC) meeting, announced the suspension of forex sale to the BDCs.

According to him, the forex traders have turned themselves into agents that facilitate graft and corrupt activities of people who seek illicit fund flow and money laundering in Nigeria.