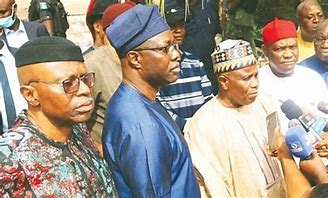 It’s a dose of uncertainties for the main opposition Peoples Democratic Party (PDP) with the mainstream developing cold feet as the Court of Appeal in Port Harcourt continued to push forward its verdict on whether the planned national convention will hold tomorrow.

The anxiety in the party was palpable yesterday, as members and supporters were seen in clusters at its Wadata Plaza secretariat, discussing the effects this ruling could have on the future of the party.

Members have expressed their fears that should the convention be stopped by the court, a regime of Caretaker Committee becomes imminent just as it has happened with the ruling All Progressives Congress (APC).

The last time the PDP had a national Caretaker Committee was between 2016 and 2017 when former Kaduna State governor, Ahmed Makarfi, held sway.

Those who shared this expectation argued that if the suspended national chairman, Uche Secondus, is restored, there might be insufficient time to plan another convention before the actual expiration of the Secondus-led National Working Committee (NWC) on December 9, 2021.

However, other party members were optimistic that the convention would be approved by the Appeal Court.

The Appeal Court in Port Harcourt, Rivers State, will today decide whether or not the PDP will go ahead with the conduct of its national convention.

A panel of three justices, headed by Haruna Simon Tsammani, reserved the ruling yesterday, after hearing arguments in the application filed by Secondus to suspend the conduct of the convention.

The convention, slated for October 30 and 31 at Eagles Square, Abuja, had been fixed by the PDP’s NWC as part of efforts to resolve the party’s internal crisis.

The convention is expected to lead to the election of new national officers. This decision did not go down well with Secondus, hence the filing of the application.

During Thursday’s proceedings, Tayo Oyetibo (SAN), counsel to Secondus, argued that refusing to grant his application to stop the PDP convention can be likened to “pulling off the rug under the feet of the appellant.”

He said his client would be permanently denied the right to preside over or participate in the convention if the pending applications bordering on his leadership and membership status do not go in his favour.

But the submission was opposed by Henry Bello, counsel to the first to fifth respondents, who are the PDP chairmen in five Local Government Areas of Rivers State. The chairmen are challenging Secondus’s right to resume as National Chairman of the PDP following his suspension from the party in his ward in Ikuru Town, Andoni Local Government Area of Rivers.

The opposition by Bello was supported by lawyer to the PDP, Sunday Ameh (SAN). He submitted that Secondus voluntarily handed over authorities of his office to a subordinate who has been acting lawfully as the National Chairman and is bestowed with the right to preside over the National Convention.

According to him, “the balance of convenience in the matter is in not granting the application to stop the convention.”

Also, Donald Dee-Nwigwe (SAN), representing the ninth and 10th respondents, picked holes in the argument by Oyetibo that the conduct of the national convention will be a denial of Secondus’ right to preside over the convention.

He submitted that “a chairmanship position of the PDP is at best a political privilege, not a right and that the September judgment of a High Court in Rivers, which validated the suspension of Secondus from the party has nullified any such privilege, which Secondus seeks to protect through his application.”

To further defend his application, counsel to Secondus, Oyetibo argued that the use of the word ‘Shall’ in the PDP convention bestowed on Secondus the right, not privilege to preside over party conventions.

However, Justice Tsammani after all the presentations, said the court has reserved to give a decision on the matter today at 12noon, barely 24 hours before a defining convention as the party plots its way back to the center.

Earlier on Wednesday, the party had indicated it may summon an emergency meeting of its National Executive Committee (NEC), depending on the judgment of the Court of Appeal. But with yesterday’s outcome, attention will again be shifted to the court today.

AMID thickening anxiety ahead of the court ruling and despite the temporary setback, the PDP boasted yesterday that the outcome of its Saturday convention would cause serious problems for the APC.

Chairman of the PDP National Convention Organising Committee and governor of Adamawa State, Ahmadu Umaru Fintiri, said the party’s adherence to internal democracy and principle of fairness has sent jitters to the APC just as he predicted imminent implosion of the ruling party as soon as the convention is concluded this weekend.

Briefing journalists in Abuja, Fintiri said: “I foresee that by the end of this convention, which will be adjudged as one of the best in history, of not just the PDP but of any political party ever in this country, is going to close down most of the political parties especially APC.

“With their own democratic process, we saw what happened, their wards and states congresses are really shattered. Instead of having 36 chairmen, they have about 90. So with this convention that we’re going to deliver, I believe with the democratic process and procedures that we have followed diligently, it is going to open floodgate for all of them to come in.”

He said the level of insecurity coupled with the failure of the APC-led government to manage the economy has made most Nigerians to lose hope in the APC.

“Everybody is not just looking up to PDP to rescue them, they are looking at PDP as a platform that will bring in a new government in 2023.”

In a separate remark, Vice Chairman of the National Convention Organising Committee and governor of Bayelsa State, Douye Diri, he called on Nigerians to support PDP in its bid to rescue the country.

When asked if the PDP was worried that the judgment might impact on the party’s convention, Fintiri said: “Not at all because we have mechanism internally to always take up issues and you know that the PDP strives better in turbulent periods.

IMMEDIATE past governor of Ondo State and national leader of the Zenith Labour Party (ZLP) has led members of the party to the PDP.

This was sequel to a ZLP stakeholders meeting with party leaders across the state held in his residence yesterday in Ondo, the headquarters of Ondo West Local Government Area of the state shortly after the visit of some PDP governors. Mimiko had left PDP for ZLP before the 2019 general election.

Earlier, the Chairman of the PDP Governors Forum and Sokoto State governor, Alhaji Aminu Tambuwal, had led three other governors to woo the ZLP national leader to rejoin PDP yesterday.

The four governors and other PDP stalwarts in the state were engaged in a closed-door meeting with the former governor, as throngs of his supporters awaited the outcome of the deliberation.

Tambuwal said: “We are here in Ondo town, the residence of our leader, Olusegun Mimiko, to re-invite him back to his political family, PDP. We are very hopeful that we are going to have positive response from him soonest. Our message is simple, let us come back together to reposition the PDP towards rescuing Nigeria now.”

Mimiko noted that “this is one of the series of interactions we have had over two months and they have come at least to convince us why we should come back to join forces with them in PDP.”

On his plan to rejoin the major opposition party, he said: “We have listened to them. We will go back to our stakeholders meeting because it is the stakeholders that will decide before we take our decision on it.”

According to a source close to the former governor, who spoke on anonymity last night, Mimiko would leave for the national convention of the PDP today.

Mimiko had not given an affirmative response to journalists when asked if he would join the PDP shortly after the meeting with the PDP governors, but it was gathered that at the stakeholders meeting that held later in the evening where the state chairman of the ZLP, Joseph Akinlaja, raised the matter, party members voted overwhelmingly for their merger with PDP.

IN a related development, former Minister of Transport, Ibrahim Isa Bio, yesterday, dumped the APC for the PDP. The former Speaker of the Kwara State House of Assembly defected alongside his supporters at his Gure/Gwasoro Ward in Baruten Local Government Area of Kwara.

In a statement in Ilorin, the party’s state Publicity Secretary, Tunde Ashaolu, welcomed Bio to the PDP, commending him for taking the bold step to join the party.

He said: “The action reflects the wishes of Kwarans who are tired of the misrule of the Governor Abdulrahman Abdulrazaq-led administration. We are pleased to welcome former Minister Ibrahim Isa Bio and his followers into the Kwara PDP family.

“We applaud his voluntary bold and timely decision to dump the retrogressive and dysfunctional APC and pitch tent with our party that is moving from strength to strength,” he added.