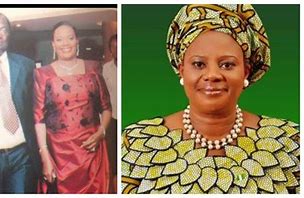 Husband to late former information minister, Prof. Dora Akunyili, Dr. Chike Akunyili, has been murdered by gunmen. According to reports, he was killed at Umuoji in Idemili North LGA of Anambra state on Tuesday, September 28.

DETAILS have emerged of how Dr. Chike Akunyili, the husband of the late director general of the National Agency for Food and Drug Administration and Control, NAFDAC, and later Minister of Information, Professor Dora Akunyili  and eight others were slaughtered on Tuesday night at Nkpor, a suburb of the commercial city of Onitsha in Anambra State.

It was gathered that unknown gunmen had opened fire in the usually busy area at a time Akunyili was returning home to Enugu after receiving a posthumous award by the University of Nigeria Alumni Association on behalf of his late wife at the All Saints Cathedral, Onitsha and he, his driver and police orderly were caught up in the shooting

Akunyili left immediately after receiving his wife’s award and was seen off by his son, Obum who also attended the ceremony. They took the old Onitsha –Enugu road only to meet their death at Nkpor Those at the vicinity said the gunmen were probably attracted to his vehicle by the policeman sitting in front of the car and then opened fire on the occupants.

According to the eyewitnesses, it was possible that the gunmen did not know the identity of Dr Akunyili at the time he was shot. The also said that the gunmen cut off the heads of three of their victims, before speeding off in a waiting vehicle.

The Anambra State Police Commissioner, Tony Olofu has assured the people of the state on the commitment of the command to ensure public safety.

In a press statement by the state Police Public Relations Officer, PPRO,, DSP Tochukwu Ikenga, Olofu who has visited the scene of the incident for on-the-spot-assessment called for collaboration between the people and the police to fish out bad elements in the state.

While not specifically speaking on the killing of Dr Akunyili, Ikenga’s statement read: “The Commissioner of Police Anambra State Command CP Tony Olofu has today 29th September, 2021, observed with grave concern, the series of security breaches that have taken place within the state and has therefore ordered tactical Commanders of the Command to immediately put an end to the madness.

“He gave this order when he led senior police officers from the command on- the-spot assessment to the crime scenes.

“The CP while regretting the unfortunate loss of lives and valuables due to those senseless acts, has sued for calm, as the Command collaborates with other security agencies in state to decisively deal with the perpetrators, who seem to have lost every iota of human conscience and sensibility in them.

“He implores members of the public, particularly residents of the state to continue to partner with the police with a view of containing these atrocious acts and that the Command is more than ever determined to flush out these undesirable elements and make the entire State safer for law-abiding citizens to go about their lawful businesses”.

Meanwhile, the former governor of Anambra State, Mr. Peter Obi, who hailed from the same Agulu community as Akunyili had visited the Iyienu Hospital, Ogidi where the corpses of the slain nine persons, including Akunyili, were deposited by the police.

Obi explained that the body of the late Akunyili would be taken to the Borromew Hospital, Onitsha where Akunyili served as chairman of its Board of Directors until his death for proper preservation.

Addressing reporters at the Palace of the traditional ruler of Agulu, Igwe Innocent Obodoeke, Obi said described Akunyili as a nice person.

He said: “Chike had always lived his life well. Nobody can explain how our society had degenerated to this level.

“I was with his son at the mortuary for identification of the body and I have spoken with his first son, also a medical doctor, who is abroad. We also visited the police station at Ogidi where his corpse and those of eight others killed on that spot were taken.

“He was a gentleman. He can’t do wrong to anybody. He just lived his life. He was always happy with himself. I am shocked that this happened to him.

“What is happening in the country now requires the collective attention of all stakeholders, including those in government, the traditional institution and presidents general of the various communities. This is something that, if not controlled, can consume everybody.

The Monarch said: “It is unfortunate for us to allow our people to be slain like this. What this means is that this type of death can come to any of us anytime. To say the least, this is not good.

“It was not long Prof. Dora Akunyili died and now the husband has joined her under this terrible circumstance. It is too early for their children to become orphans.

“ It was in the morning that the chairman of Agulu Caretaker Committee called me and narrated what happened to Dr. Chike Akunyili. It was terrible that such a nice man should die in this manner.

“Chike was a lovely, humane person. He had no issues with anybody. I lack worlds to describe this kind of situation, but I blame the government for not providing security for our people any longer. He was not supposed to die in this manner”.