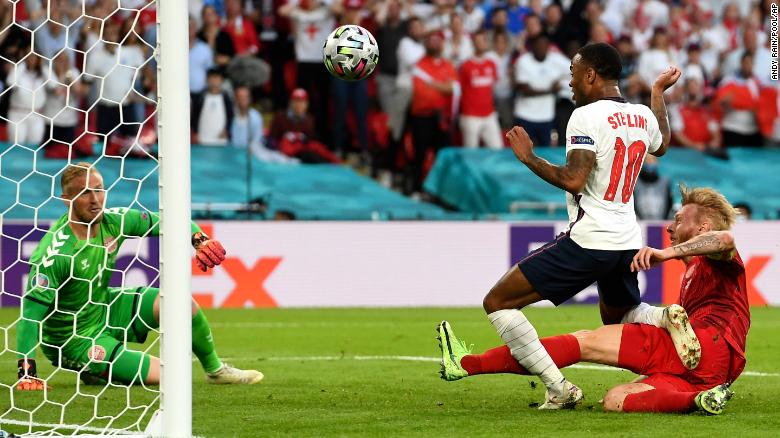 England reached its first men’s major tournament final since winning the World Cup in 1966 after beating Denmark 2-1 at Euro 2020 in a gripping encounter on Wednesday at Wembley Stadium.

Gareth Southgate’s team had to come from behind to win and, as the match went into extra-time, a contentious penalty decided the match.

Raheem Sterling went down in the box under pressure from a melee of Denmark players and, after referee Danny Makkelie awarded the penalty, the decision was confirmed by VAR.

To add to the drama, Harry Kane’s spotkick was saved by Kasper Schmaichel, but the England striker pounced to score from the rebound.

Simon Kjaer’s own goal had cancelled out Mikkel Damsgaard’s wonderful free-kick in the first half in a game that saw Denmark produce another gutsy performance that has typified their tournament, following Christian Eriksen’s collapse in the team’s opening match.

For England, the tie bore similarities to its last semi-final at a European Championship, against Germany in 1996.

That too was played in front of a packed Wembley Stadium but the tie ended in very different circumstances. Southgate was the man to miss the decisive penalty that night but, fast forward 25 years, and the 50-year-old has guided his country into its first European Championship final.

“I’m so proud of the players,” Southgate told the UEFA website. “It was an incredible occasion to be a part of. The fans were incredible all night.

“England will now face Italy in the final after the Azzurri beat Spain on penalties Tuesday. Whilst the Italian side has looked imperious during Euro 2020, England will hope the home support at Wembley can inspire it to a historic victory on Sunday.

The UK government allowed 60,000 fans to pack into Wembley Stadium for the semifinals, and those lucky enough to get their hands on tickets for Wednesday’s match experienced an atmosphere like no other.England fans were unsurprisingly in the majority, singing and dancing their way down Wembley Way — the famous road that leads to the ground — before creating a party atmosphere inside the stadium as the sound of “Sweet Caroline” swirled around the cavernous venue.If fans of the Denmark team were in the minority, they certainly made their presence noticeable, with one end of the stadium littered with Danish flags.

A wall of noise and a sense of nervousness and anticipation greeted as the players made their way out of the tunnel. After being locked down amid Covid-19 restrictions, it felt like one huge outpouring of emotion, reverberating through Wembley.”The whole feel good factor is about to burst with pure joy,” one England fan told CNN as he walked to the stadium with his son.

“I think everybody has just had this pent up emotion over this last year. It’s a time when the end is in sight … I think we are on that crest of the wave that I hope never breaks.

“In those opening minutes England, in particular, looked inspired by that support.

After a manic start, the game settled down with Denmark sitting back and England doing most of the attacking. Sterling had a couple of half chances as the home support roared on the men in white.

All of England’s good early work was almost undone by a moment of madness from goalkeeper Jordan Pickford.

After a routine save and under no pressure at all, his weak throw was easily intercepted but Denmark just couldn’t work a space to shoot into what would have been an empty net.

After that, the Danes grew into the game and took the lead through a magical Damsgaard free-kick on the half-hour mark. The set-piece was near perfect, whipped over the wall and giving Pickford no chance of saving it.

The goal, the first England has conceded in this tournament, quieted the crowd — but only temporarily.

England was galvanized and moments after Sterling was denied an equalizer by a wonderful save from Schmeichel, Bukayo Saka’s cross was accidentally turned in by defender Kjaer. In truth, Sterling was waiting for a tap-in had Kjaer not deflected the ball into the net.

The second half started like the first with England on the hunt for a goal. Harry Maguire almost found the net with a header but Schmeichel was there yet again to push the effort to safety.

Clear cut-chances were then few and far between as nerves seemed to take over in that second period, with extra-time needed to separate the sides.

The English pressure only intensified after the break as it continued knocking at the red wall of defenders. Kane had an effort well saved before Jack Grealish’s shot stung the keeper’s palms.

Then came the pivotal moment when Sterling went down under pressure in the box. Contact was minimal but enough, according to the referee.

Kane, usually so assured from the spot, had his first attempt saved but sent a country into delirium as he stabbed home the rebound.

“Unbelievable — what a game though, credit to Denmark,” Kane told the UEFA website. “We dug deep and we got there when it mattered. We reacted really well. We’re in a final at home, what a feeling.”

For Denmark, which won Euro 92, this has been an extraordinary tournament.

The team, and nation, was shaken when its talisman Eriksen collapsed on the field during its opening group game against Finland.

The power, strength and resilience shown by the Danish players as Eriksen recovered will inevitably go on to define this tournament and both teams paid tribute to the playmaker before the semifinal.

England captain Kane presented Denmark with an Eriksen shirt signed by all the players ahead of kick-off, a gesture applauded by both sets of fans.

Then Southgate’s side went about the task of trying to make history. The country felt like it needed, almost expected, a win on Wednesday after so many years of disappointment and it finally got its wish.

Italy awaits and is likely to present England with it sternest test yet at Euro 2020.

“We know it’s going to be a very tough game against Italy,” Kane told the UEFA website. “We’ve had a great tournament so far. One more game to go at home, and we can’t wait.”

Insurgency: Over 65,800 Borno farmers kicked out of farms by terrorists – FAO

‘A repeat of what happened in Afghanistan won’t happen in the West Africa country.’_ Mary Leonard