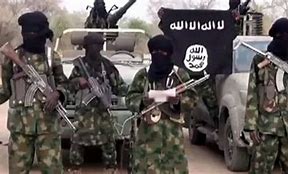 The acting Director, Defence Media Operation, Brig.-Gen. Bernard Onyeuko, disclosed this while
briefing newsmen on operations of the armed forces between June 18 and 30 on Thursday in Abuja

Onyeuko said that the troops also recovered a large cache of arms and equipment from the terrorists in
different encounters during the period.

He added that the troops had on June 27, received a total of 55 escapees from terrorists’ camps
comprising 15 adult males, 12 adult females and 27 children who surrendered to them at Darajemel in Borno.

The acting director said that another feat was achieved the same day when the Air Component of Operation Hadin Kai, in coordinated
multiple airstrikes destroyed some terrorists’ commander’s strongholds at the Lake Chad axis of Borno.

He added that “the airstrikes were targeted at various terrorists’ camps in Sabon Tumbu, Jibularam and Kwalaram towns in the state.

“During the air operations, the spiritual base and training camps of the terrorists in the North-East part of Borno State and the fringes of Lake Chad were destroyed by air bombardments.

“These came on the heels of credible intelligence report which revealed that, some top ISWAP/BHT commanders were holding a meeting at the said locations.

“Consequently, the Air Component mobilized with force packages of NAF platforms and launched attacks on the locations.”

In the North West, Onyeuko said, troops of operation Hadarin Daji and other security agencies executed series of land and air operations concurrently in different locations during the period.

He explained that the operations led to the repelling and arrest of kidnappers and drug peddlers who confessed to supplying illicit drugs to miners as well as other criminal elements.

The spokesman said the operations also led to the killing of scores of bandits; peaceful resolution of farmers/herders’ clashes; recovery of arms and ammunition as well as recovery of rustled livestock.x

“The operations also resulted in the rescue of kidnap victims in various locations including a teacher and some students kidnapped at the Federal Government College in Birnin Yauri, Kebbi.

“Some gunrunners and bandits logistics suppliers, including one Lawali Na Habu was also intercepted with trucks loaded with large quantities of AGO at Tangaza LGA of Sokoto State and one Mallam Ibrahim Aliyu, a wanted notorious bandit was also arrested.

“On the whole, troops have continued to dominate the theatre of operations with aggressive fighting and confidence-building patrols to reassure citizens of the commitment of the military to end all of the form criminality in the zone,” he said.

Fani-Kayode is an unstable and untrustworthy element — Activist