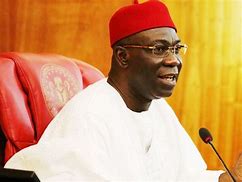 A civil society group,has reacted strongly to a statement credited to Senator Ike Ekweremadu, stating that ceding the 2023 Igbo Presidency would end Biafra Agitation.
Comrade Kennedy Iyere, Leader of Global Movement for Igbo President 2023 (GLOMIP 2023) described Senator Ike Ekweremadu, as a subtle  hypocrite,  who ought to remain voiceless on issues and national conversations relating to the 2023 Igbo Presidency.
Iyere said:
“On the 10th March, 2021 at about 7pm, I visited Senator Ekweremadu in his residence at the Apo Legislative Quarters, the purpose was to have a private discussion with him about the need in 2023 for a Nigerian President of Igbo extraction.
“But to my greatest dismay, Senator Ekwemadu told me that those of us pushing for Igbo Preaidency in 2023 are not asking for the right thing. He told me he has nothing wrong with the North retaining Presidency in 2023”. The activist continued ,
How come, this same Senator Ike Ekweremadu, is the one coming out to pretentiously advocate for 2023 Igbo Presidency. He is a Pretender seeking cheap national recognition and unpopular endorsement among Igbos.
It may interest you to also know that Comrade Kennedy Iyere, is the Founder/Coordinator of the Global Movement for Igbo President 2023 (GLOMIP 2023), the flagship global campaign group for 2023 Igbo Presidency.
He is a frontline champion and campaigner for “2023 Power Shift” from the North to the South. He believes the fact that the Presidential Seat must be zoned to the South in 2023. He is a very close and strong ally of the Afenifere Group, Yoruba Council of Elders (YCE), Pan Niger Delta Forum (PANDEF), Middle Belt Forum (MBF), Southern and Middle Belt Forum (SMBF) etc. He is the face of the global  advocacy for 2023 Igbo Presidency.
“Igbos are the greatest obstacles to the actualization of Igbo Presidency in 2023”, that was also a quote by Comrade Kennedy Iyere.
He further confirmed the fact that in 2023, Presidency will shift from the North to the South.
According to him, he may shift his support from the Igbos, if they refuse to have a change of attitude. He added that the Yorubas are better positioned to clinch the presidential ticket in 2023, he will be ready to work in favour of the Yorubas.