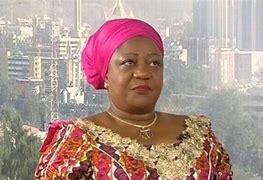 Despite her denial before the Senate Screening committee, irrefutable evidence has emerged that Lauretta Onochie is a card-carrying member of the ruling All Progressives Congress (APC).

She is number 2 in the just concluded registration exercise.

Yet she denied before the Senate that she is no longer a member of APC.

According to an APC member in the state who “despite her denial before the Senate Screening committee, Lauretta Onochie is a proud member of the ruling All Progressives Congress”.