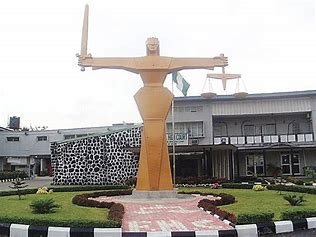 Lawyers and defendants are increasingly worried about the ever-rising backlog of cases due to the strike which has prevailed since April of 2021.

The nationwide strike of court workers in Nigeria is paralysing the justice system, resulting in extended prison remands for those awaiting trial or sentencing and lengthy delays for everyone else.

Even before the strike, it could take months to be allocated a court date. The strike has put more strain on an already underfunded and overwhelmed judiciary.

The union said the industrial action was to demand financial autonomy for courts, rather than relying on the often corrupt system of funding from state governors, who are regularly accused of misusing funds, with several convicted of fraud.

Nigeria’s constitution gives the judiciary financial autonomy from state governors and heads of courts access to a federal fund. But the government did not comply with this provision in the 1999 constitution until the union took action in 2014 – the second in three nationwide strikes by Nigeria’s court staff.

The union said the dependence on the executive for funds has affected the day-to-day running of the justice system.

Kehinde said that even though the strike had been primarily about the refusal of the state governors to stick to the law, the welfare of the court workers was also a union grievance.

“For us as the staff, if the place of work is not conducive, it is our right to champion the cause of making our workplace a better place. When we have our autonomy, then the welfare of the staff would be better discussed with the heads of the court.”Advertisement

As the strike has dragged on, Ebun and thousands of others awaiting trial have been stuck in prison.

Juwon Sanyaolu, 29, a political activist based in Lagos, was arrested with several others in January in Abuja for protesting against government corruption and detained for 11 days.

He has been released on bail but the government has brought a case against him and the other protesters. He was due to appear before magistrates on 5 May but the court closure has left him in limbo.

“I have just been stuck in Abuja since that day. I stay in Lagos, and this is affecting my work,” he told the Guardian.

Inibehe Effiong, a lawyer and activist, said: “The closure is a painful but necessary action that had to be taken because in the long run, if the judiciary is not functioning independently, access to justice is going to suffer.

“We cannot continue with the current arrangement, where state governors see the judiciary as an extension of the ministry of justice and chief judges [as] serving at their pleasure. They don’t allow the heads of the court to have the money they are entitled to.”

As the World Celebrate International Women’s Day, We ask all Women to Call Mad Putin to Order!