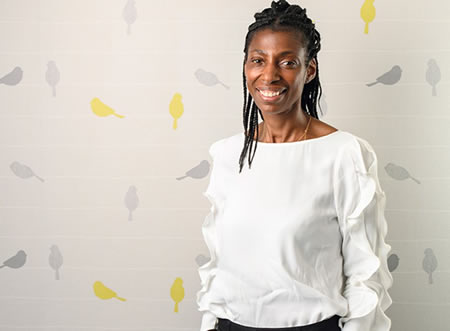 Sharon White has never held an executive post in British retail, or in any other commercial business for that matter. Yet the career civil servant has been entrusted with steering one the country’s best-known store chains through its greatest period of disruption in recent times.

The former chief executive officer of Ofcom, the U.K. communications regulator, starts her new job on Tuesday as chairman of John Lewis Partnership Plc, making her one of the most prominent black women in the British corporate world. Among the most urgent priorities in White’s inbox: completing her predecessor’s revamp of the company’s structure, finding replacements for recently departed senior talent and trying to reverse declining sales.

White was a surprise choice to succeed Charlie Mayfield at the helm of Britain’s largest employee-owned business — home to John Lewis, the department store, and Waitrose, the upmarket grocer. She takes over as the 91-year-old retailer is about to merge the two businesses to cut costs and mulls eliminating its revered staff bonuses. Like other traditional store chains, John Lewis is in a fight for survival as reduced foot traffic, the rise of e-commerce/Amazon.com Inc. and heightened competition cause profit to plummet.

“It is a hellishly difficult thing to know what to do” with the partnership, said Tony Shiret, a retail analyst at Whitman Howard in London. “Sharon White will have to run John Lewis very defensively to start with.”

Whatever White decides to do, she’ll probably need to act fast. Profit at the department store arm more than halved in the past three years to reach 114.7 million pounds ($149 million), and may fall to as low as 30 million pounds in the current fiscal year ending in March, according to analysts.

The company is owned by its more than 80,000 employees, known as “partners,” who receive annual profit-sharing bonuses. Once as high as 24% of their salary, the payments fell to 3% last year, the lowest since 1953 when postwar rationing was still in place. Mayfield warned last month that there might be no bonuses at all in 2020.

Results are being dragged down by the poor performance from the 50 John Lewis department stores, once regarded as the destination of choice for middle-income shoppers. Debenhams and House of Fraser, John Lewis’s two main rivals, have also struggled in recent years, closing down stores and being rescued by investors.

“John Lewis department stores should be performing better” given its rivals’ problems, said Clive Black, a retail analyst at Shore Capital in London. “We get the sense that Sharon White will instigate a big change program, which is perhaps long overdue.”

Both White, 52, and John Lewis declined to comment for this article.

As she starts her new job, White may not find many senior people around to help show her the ropes. Craig Inglis, the marketing executive responsible for the famed John Lewis Christmas advertisements, left in the past few days. Paula Nickolds, the managing director of the department store division, stepped down last month. She was due to take up the new position of executive director of brand, overseeing the combined businesses.

This followed the departure of Rob Collins, the managing director of Waitrose. Although the grocer is performing better than John Lewis — its profit this year should be roughly in line with the previous year’s 203 million pounds — it still operates in a highly competitive industry. Waitrose also has yet to set out how it will meet a goal to triple the size of its e-commerce business when its partnership with the online grocery supplier Ocado comes to an end this year.

The merger of John Lewis and Waitrose, which will be completed this month, will result in the overall loss of a third of senior managers across both businesses. It is intended to save about 100 million pounds over time.

In announcing his replacement last June, Mayfield conceded that White was an unconventional choice, but said she had the “vision, leadership, drive and flair to steer the partnership through its next phase.”

The daughter of Jamaican immigrants, White studied economics at the University of Cambridge and University College London and joined the civil service in 1989. She held a variety of roles before being appointed as the Treasury’s second permanent secretary, one of the most senior roles in the civil service.

She became head of the communications regulator in 2015, developing a reputation as a consumer champion with a steely resolve while helping drive a period of immense change in the U.K. media industry. Among other things, she blocked the merger of Telefonica SA’s U.K. wireless business with CK Hutchison Holdings Ltd.’s, citing concerns that it could hinder competition.

“She was always someone who got things done, and she will certainly shake things up at John Lewis,” said Paolo Pescatore, an independent telecommunications analyst in London.

— With assistance by Thomas Seal, and Joe Mayes