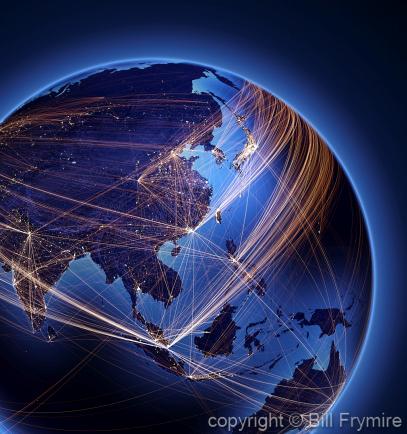 China has four overarching strategic interests in Africa. First, it wants access to natural resources, particularly oil and gas. It was estimated that, by 2020, China will import more oil worldwide than the United States. To guarantee future supply, China is heavily investing in the oil sectors in countries such as Sudan, Angola, and Nigeria. Second, investments in Africa, a huge market for Chinese exported goods, might facilitate China’s efforts to restructure its own economy away from labor-intensive industries, especially as labor costs in China increase.

A Senegalese banana vendor wears a T-shirt showing China’s President Hu Jintao and Senegalese leader Abdoulaye Wade along with the slogan “Together with China we will build a new world.” February 2009.

African governments look to China to provide political recognition and legitimacy and to contribute to their economic development through aid, investment, infrastructure development, and trade. To some degree, many African leaders hope that China will interact with them in ways that the United States and other Western governments do not — by engaging economically without condescendingly preaching about good governance, for example, or by investing in high-risk projects or in remote regions that are not appealing to Western governments or companies. Some Africans aspire to replicate China’s rapid economic development and believe that their nations can benefit from China’s recent experience in lifting itself out of poverty. Consider the China- Africa Relationship.

China is both a long-established diplomatic partner and a new investor in Africa. Chinese interests on the continent encompass not only natural resources but also issues of trade, security, diplomacy, and soft power.