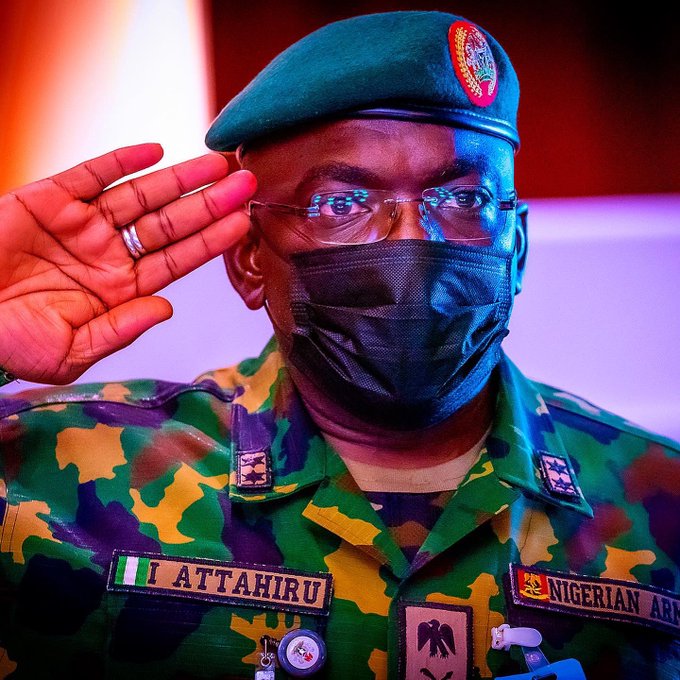 The Chief of Army Staff, Lt. Gen. Ibrahim Attahiru, died in a plane crash in Kaduna on Friday.Impecable aviation sources had earlier told Saturday Punch that Attahiru, who was appointed Chief of Army Staff on January 26, died alongside 10 others who were on board the aircraft with him.

The incident occurred at about 6pm while it was raining heavily.The aircraft, with registration number 5N-R203, was billed to land at the Nigerian Airforce Base in the Mando area of Kaduna before it diverted and attempted to land at the Kaduna International Airport.

The officers were said to be on their way to Kaduna ahead of Saturday’s passing-out parade of soldiers from the Nigerian Army Depot in Zaria.The Nigerian Air Force confirmed that there was an accident involving one of its aircraft in Kaduna but did not provide details.“An air crash involving a @NigAirForce aircraft occurred this evening near the Kaduna International Airport. The immediate cause of the crash is still being ascertained. More details to follow soon,” the NAF Director of Public Relations and Information, Edward Gabkwet, said in a statement.A source in the Accident Investigation Bureau also confirmed the crash.Also, an Aircraft Traffic Controller source told Saturday PUNCH that the NAF jet diverted from the military airport to the civil one due to weather, touched down but skidded off Runway 05 and went into flames.“The aircraft had seven persons on board and four crew members. The accident occurred at 1759 UTC. Safety services are currently at the crash site. Further reports from the crash site confirmed aircraft completely burnt, and unfortunately, there was no survivor,” the source said.

Another military source said bad weather forced the pilot to divert the aircraft from the military airport to the civil airport.

“The death is so sad because the army chief had a master plan to defeat terrorism in the country. Just while he was working with his other colleagues who are heading the airforce, the navy and even the chief of defence staff, death struck.“He, being a military officer and a Muslim, and barring any last-minute change, will be buried according to Islamic rites at the National Military Cemetery on Saturday (today).”However, the Nigerian Army on Friday confirmed Attahiru’s death. In a statement by the Director, Army Public Relations, Brigadier General Mohammed Yerima, the army noted that the incident also killed 10 others without revealing their identities.The statement read, “The Nigerian Army regrets to announce the passing away of its Chief of Army Staff, Lt Gen Ibrahim Attahiru.

The sad event occurred following an air crash in Kaduna which also claimed the lives of 10 other officers including the crew.The COAS was enroute Kaduna from Abuja on Friday, May 21, 2021 when the unfortunate incident happened. Details of the sad incident and burial arrangements will be communicated soon.”