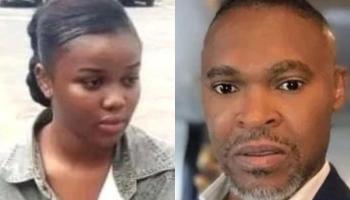 Uwatifo Ataga, the cousin of the deceased Super TV CEO has said in Monday that the state in which the corpse was found was very questionable.

Ataga was found dead days after checking into an apartment with Chidinma in Lekki, Lagos.

The suspect had fled the scene of the crime until she was arrested at her father’s house in Yaba, Lagos.When she was paraded by the police in June, the 300 level student of the University of Lagos had said she killed the Super TV CEO while he was trying to force himself on her.

According to Uwatifo, the extent of the stab wounds as well as the way Ataga’s hands were tied, was so bad that the act could not have been done by just Chidinma.

But In an interview with Crime Fighters released on Monday, the 21-year-old said contrary to her initial statements that she had stabbed Ataga as a way of self-defense, she had nothing to do with his death.

She explained that while they were lodged in the short-let apartment, she briefly stepped out to buy some things only to return to his lifeless body.

“As I was leaving the apartment, he stood up to lock the door. When I came back, I knocked but there was no response. Then I opened the door and realized it wasn’t locked,” she said.“The duvet was on the floor and pillows. The couch was facing the door and the bed was stained with blood and the floor where he was.

Music was on, the TV was on. The room was in disarray like someone broke in.

“Then I saw him on the floor, I didn’t know what to do. I was afraid. I thought if I raised an alarm I would be arrested because we were the only people in the room”.

She claimed that the only reason she took responsibility for the incident initially was that it was just both of them in the room and she felt that no one would believe her story.

“I never had anything to do with his death. I didn’t involve anybody. I don’t know who must have come into the apartment. Definitely, somebody did but I don’t who the person is. I don’t know what happened when I left to buy food,” she said.

But a cousin of the deceased CEO of Super TV, told Crime Fighter TV that he was convinced that the murder was not carried out by Chidinma alone.”I have had the regrettable privilege of seeing that dead body five times. My cousin’s hands were tied so badly that the rope entered his skin. The rope is right there as an exhibit with the police.”“That binding could not have been done by that lady alone, not possible, even if he was drugged. It is not possible because I saw the lady and I saw my cousin and I said this is not possible.

“Apart form the fact that he was tied, there were multiple stabs on his body. So that story of two stabs and neck is not true. He was stabbed in other places.

In fact, at Yaba mortuary, the attendants were so dramatic that they told us clearly of multiple stabs,” he said of the corpse of the late Super TV CEO.

Blame game escalates between US and China over coronavirus disinformation