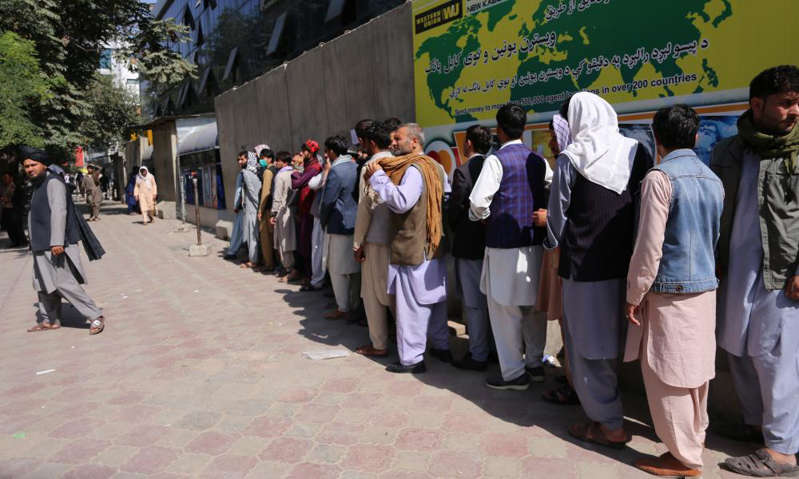 The Taliban took Afghanistan in a lightning advance through its capitals, exposing the weakness of the Kabul government and humbling the US and its allies. This week’s withdrawal of western forces is their greatest victory. As they prepare to announce their government, reviving Afghanistan’s shattered economy may be the group’s biggest challenge.

What has happened to the Afghan economy since the Taliban took over?

Amid the country’s worst drought in decades and deteriorating security, Afghanistan’s economy had been struggling for years even before the events of August. The sudden ascent of the Taliban has been the strongest shock yet.

The cost of goods that ordinary people rely on to survive, such as flour, oil and rice, has been rising each day. So has the price of fuel, adding to the pressure on families who rely on driving to get to work.

Queues stretch for hundreds of metres outside banks which – fearing a run on accounts – have limited withdrawals, sparking a cash crisis that is freezing economic activity in large cities.

“Banks are still closed in Herat city,” said Shahab Siddiqui (not his real name), a public servant there. “Only two ATM machines are working in the entire city, you have to line up for hours. But when your turn arrives, they run out of money or an electricity cut happens.”

The uncertainty and fear has displaced hundreds of thousands of Afghans internally and across borders into countries such as Iran or Pakistan.

For many Afghans, it is less the restriction of their personal freedoms than these dark economic clouds that are keeping them up at night. “That’s the question everyone asks here,” said a money changer in Herat, who asked not to be named. “How will the Taliban deal with money? One US dollar is now at 86.3 afghanis [the Afghan currency]. It was at around 80 before the fall of the previous government.”

Why has the economic blow been so heavy?

One of the key reasons is that the Afghan economy was hugely reliant on foreign donors that had a stake in the previous government – and who are not yet clear about how they will engage with the Taliban.

Since the US-led invasion, Afghanistan’s economy has been propped up by foreign aid and development assistance, which made up more than 42% of the country’s GDP last year and funded three-quarters of public expenditure.

That aid had been shrinking over recent years, and few private companies have been willing to invest in a country so unstable. With the Taliban’s return to power, the US, UK, International Monetary Fund, World Bank, EU and Germany have been among the donors who have already suspended the development funds they planned to give Afghanistan. They may continue to provide humanitarian aid, but this is likely to be channelled through charities rather than the Taliban government.

“If the [aid] freeze continues for a lengthy period,” a Chatham House analysis said, “it will cause a massive contraction in government financing, leading to the lay-off of civil servants and NGO staff, the collapse of essential services such as health and education, and the risk of hyperinflation.”

Nor can the Taliban dip into the country’s reserve assets to arrest the depreciation of the afghani. The bulk of these holdings – more than $7bn (£5.1bn) of an estimated total of about $10bn – are in US bank accounts that Washington has frozen.

Combined with a drought that will dent crop yields – it is still unclear precisely by how much – Afghanistan is facing significant food shortages this winter, the UN’s World Food Programme has warned.

What do these economic problems mean for the way the Taliban will govern?

The Taliban understands that governing effectively will mean delivering on people’s basic needs and providing hope for the future in a country where the average citizen is aged 18.

So far, they have appeared magnanimous in victory, calling for renewed relations with many of the countries they outlasted to wrest back control of Afghanistan, including the US.

Analysts have taken that as a sign the group’s leaders intend to try to integrate to some extent with the global economy and try to gain access to foreign aid and development funds.

“The Taliban are fully conscious they will need access to the global financial system,” said Fung Siu, a principal economist for Asia at the Economist Intelligence Unit. “They know they need international aid to prevent a complete collapse of the economy, because if it collapses you’ll have social disorder in the country and they may not be able to control that.”

There are already indications of greater openness to international organisations by the group, Siu adds. “Twenty years ago the Taliban were really dependent on their own means, they didn’t seek out [foreign] help. But the World Health Organization has managed to airlift supplies and they did this from Qatar using the Pakistani national airlines. So they’re not completely closed to assistance, it’s just that it will need to be done in a very difficult and convoluted manner.”

The economic stakes may give the west some leverage to influence the incoming Taliban administration, perhaps tying the unfreezing of funds to progress on human rights or denial of space to jihadist groups. But ultimately, it will be the suffering of the Afghan people being bargained over.