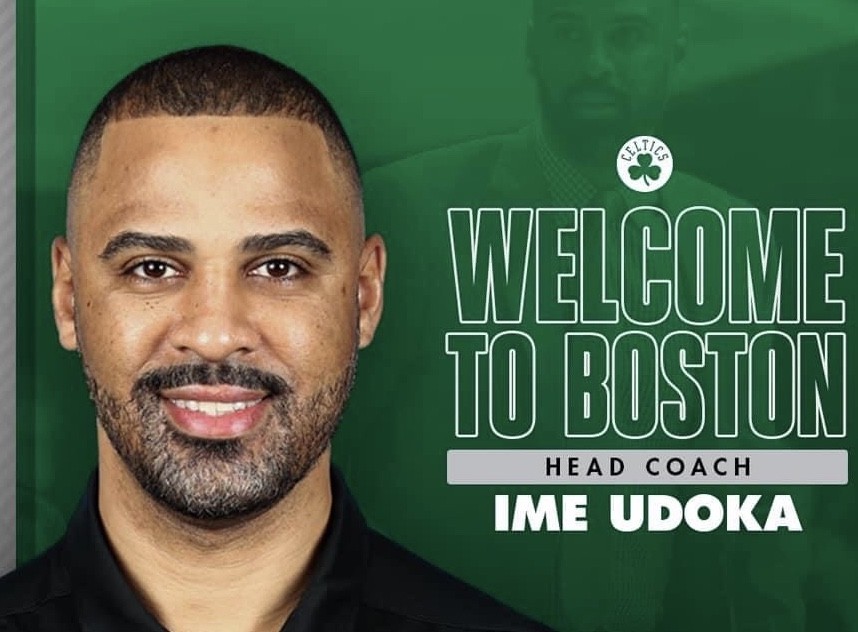 The Boston Celtics have named seven-year NBA veteran Ime Udoka the franchise’s next head coach, making him the 18th head coach in the organization’s 75-year history. Per team policy, terms of the deal were not disclosed.“I would like to welcome Ime, Nia, Kez, and Massai to the Boston Celtics.

Among the many outstanding qualities that Ime brings to the table are his character, humility, and competitiveness. He has a relentless work ethic and a vast array of experiences as a player and coach,” said Celtics President of Basketball Operations Brad Stevens.“He’s a leader that is warm and demanding, and we are so excited that he has chosen to join us in pursuit of Banner 18.”

Udoka joins the Celtics franchise after spending the last nine NBA seasons as an assistant coach between San Antonio (2012-13 to 2018-19), Philadelphia (2019-20), and Brooklyn (2020-21).Teams that Udoka has served as an assistant coach on have qualified for the playoffs in all nine seasons, with one of those years resulting in an NBA championship (Spurs, 2014).In addition to his coaching experience in the NBA, Udoka was also an assistant coach for Gregg Popovich and the USA Basketball Men’s National Team in 2018.

“It’s an honor to be a part of the historic Celtics franchise. Coaching this talented roster and working alongside Brad makes it an ideal situation,” said Udoka. “I’d like to thank Wyc, Steve, and Brad for entrusting me with this opportunity. I look forward to getting started right away.”Udoka played 12 years of professional basketball, including seven seasons in the NBA from 2003-04 to 2010-11. He averaged 5.2 points on 41.7% shooting (35.6% 3-PT), 2.9 rebounds, 1.0 assist and 18.1 minutes in 316 career games with San Antonio, Portland, Sacramento, New York, and the Los Angeles Lakers.Udoka also represented Nigeria in international competition throughout his playing career, earning bronze medals in 2005 and 2011 at the African Championships.“Ime stands out as a person of integrity, accomplishment, energy, and insight,” said Celtics Co-Owner and Governor Wyc Grousbeck.

“He has worked with some of the best and is ready to take the next step forward. I look forward to having him as our head coach.”“Ime’s passion for basketball and coaching is extraordinary,” said Celtics Co-Owner and Alternate Governor Steve Pagliuca.

“He is respected by players and coaches throughout the league for his empathy, humility, and deep knowledge of the game. We are thrilled that he will be coming to Boston to lead our team.”