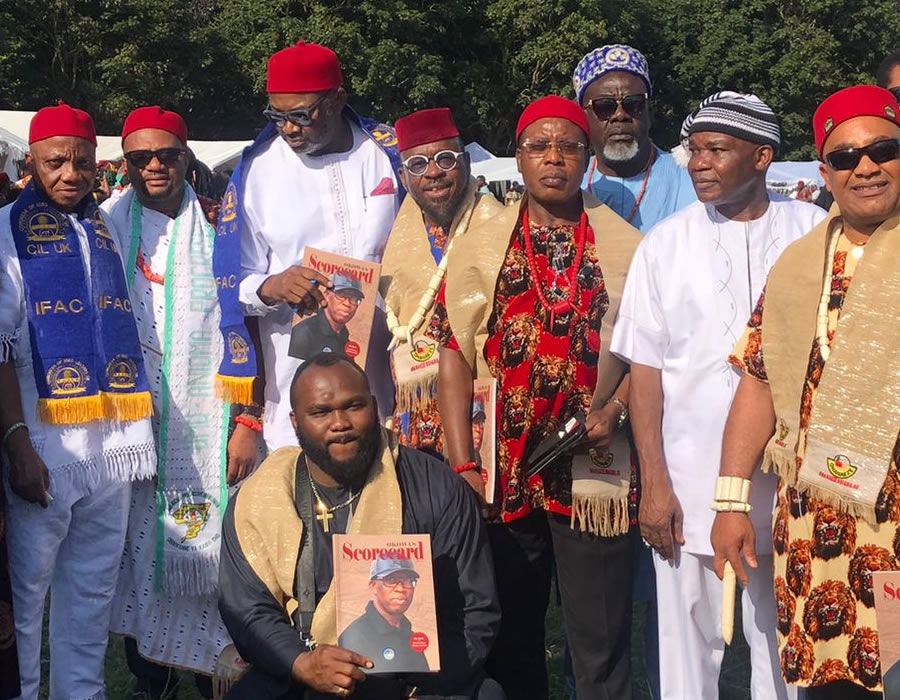 His Excellency, Sen. Dr. Ifeanyi Okowa, Executive Governor of Delta State, facilitates with the Council of Igbo Leaders, the organisers of the Igbo Festival of Arts and Culture, UK and the State of Igbo Nation Conference, UK on the celebration of Igbo Festival in London.

Ifeanyi Arthur Okowa, is a Nigerian politician who is the current Governor of Delta State. He was inaugurated as a Governor In 2015, after winning the state elections conducted in April 2015. Before his governorship appointment, he was elected Senator for Delta North Senatorial District in the April 2011 national elections. He ran on the People’s Democratic Party (PDP) platform. He is from Owa-Alero in Delta State, Nigeria. He is also the first person from Anioma to clinch the governorship position of Delta State. He was re-elected as the Governor of Delta State in 2019. He is currently the Vice Presidential Candidate for PDP in the upcoming general elections in Nigeria.
Ohaneze Ndigbo UK Leadership led by the President Prof. Joe Ukemelam, welcomed the three man delegation representatives of His Excellency, Sen. Dr. Ifeanyi Okowa, who was the Special Guest of Honour at the Igbo Festival of Arts and Culture 2022 held at the great Jubilee Park in Enfield, London. The delegation was ably led by Dr. Kingsley Emu, the Special Adviser to the Governor on economic matters, Hon. Paul and Hon. Moses. Ohaneze Ndigbo UK, in welcoming His Excellency, Sen. Dr. Ifeanyi Okowa, accepted him as the son of Igboland and one of their own, as they wished him the very best in the future.

They requested that Dr. Emu, kindly extend their sincere appreciation. in his representative capacity Dr. Emu, relates the Governor’s message of solidarity and communality with his people ndigbo in the diaspora for upholding the culture and traditions of Igboland. The delegation also took time to facilitate with the Anioma and Delta Igbo communities at the festival ground. The group was happy and pleased to receive the Governors representative in their canopy stand.