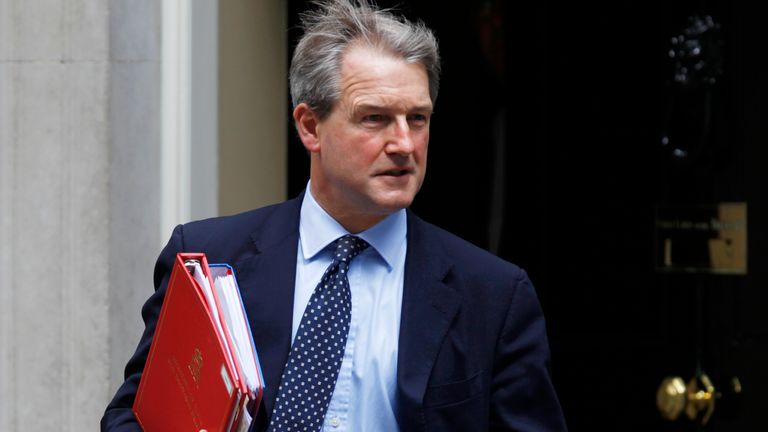 Conservative former cabinet minister Owen Paterson resigns after being at the centre of a furious Westminster row following the recommendation he be suspended for 30 days for breaching lobbying rules.

Owen Paterson will resign as the MP for North Shropshire in order to escape “the cruel world of politics” following a furious row over his proposed ban from the House of Commons.

The Conservative former cabinet minister has been at the centre of a scandal after it was recommended he be suspended for 30 days.

Prime Minister Boris Johnson said he was “very sad” to see Mr Paterson standing down after a “distinguished career”.

Mr Paterson, who has been an MP for 24 years, was found by parliament’s independent sleaze investigator to have broken lobbying rules during his £110,000-a-year private sector work.

On Wednesday, Conservative MPs – with the encouragement of the prime minister – passed a motion in favour of ignoring Mr Paterson’s month-long Commons suspension.

As part of the backlash, the government was accused of “corruption” in seeking to overhaul parliamentary standards rules in an alleged effort to protect the MP. 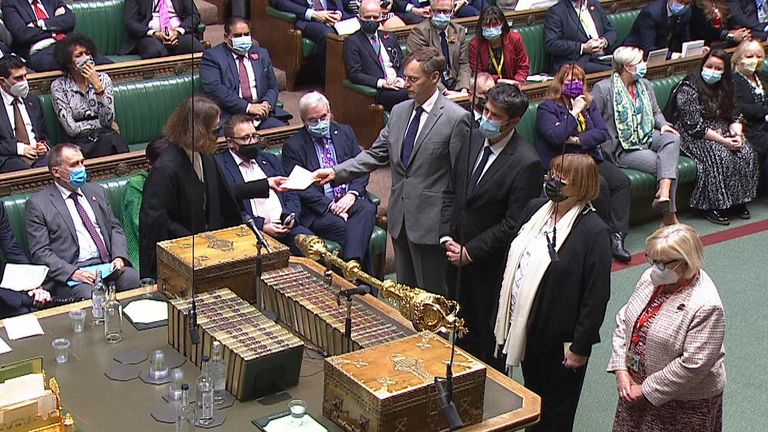 The PM was deeply unimpressed with Mr Paterson’s interview with Sky News on Wednesday evening, where he insisted he “wouldn’t hesitate” to act in the same way “tomorrow”, two sources have told Sky News.

In the face of a huge outcry, the government performed a U-turn in the row on Thursday less than 15 hours later with the promise of a new vote on Mr Paterson’s suspension.

But, just hours later, the 65-year-old announced his intention to resign from the House of Commons.

“I have today, after consultation with my family, and with much sadness decided to resign as the MP for North Shropshire,” he said.

“The last two years have been an indescribable nightmare for my family and me. My integrity, which I hold very dear, has been repeatedly and publicly questioned.

“I maintain that I am totally innocent of what I have been accused of.”

Owen Paterson has jumped before he was pushed. Or was he pushed?

After the government’s spectacular U-turn following a furious backlash from MPs of all parties, it was almost inevitable that next week’s Commons vote on his suspension would go against him.

With that would have come the humiliating prospect of a recall petition and likely by-election, which even though he could have stood again he would almost certainly have lost.

His North Shropshire constituency is a blue chip Tory seat where he had a majority of just under 23,000 at the last election.

But under the rules on the recall of MPs it only requires 10% of the electorate in a constituency to trigger a by-election. In the case of Shropshire North that means 10% of 77,673: fewer than 8,000.

He appears to have jumped before he was pushed, but it’s entirely possible that he has been ordered to go by the Number 10 machine or the chief whip, Mark Spencer.

Despite his protestations of innocence, he has brought disgrace on the Conservative Party and the prime minister and, one way or another, he had to go.

Responding to the resignation, the PM said in a statement that he could “understand why” Mr Paterson had “decided to put his family first”.

“I am very sad that Parliament will lose the services of Owen Paterson who has been a friend and colleague of mine for decades,” Mr Johnson said.

“He has had a distinguished career, serving in two cabinet positions, and above all he has been a voice for freedom – for free markets and free trade and free societies – and he was an early and powerful champion of Brexit.

“I know that this must have been a very difficult decision but I can understand why – after the tragic circumstances in which he lost his beloved wife Rose – he has decided to put his family first.”PM’s miscalculation on lobbying row will concern Tories who value his political instincts

Mr Paterson was last month found by a Commons watchdog to have “repeatedly used his privileged position” to benefit Randox, a clinical diagnostics company, and Lynn’s Country Foods, a meat processor and distributor.

He has continually declared himself “not guilty” and strongly criticised the investigation into his private sector work, which he said saw him raise serious issues about food contamination during his contact with officials.

Mr Paterson has also said the investigation “undoubtedly played a major role” in his wife, Rose Paterson, taking her own life in June last year.

In his resignation statement, he maintained that he had “acted at all times in the interests of public health and safety” and claimed the current standards system in parliament would leave him “unable to clear my name”.

“Far, far worse than having my honesty questioned was, of course, the suicide of my beloved and wonderful wife, Rose,” he added.

“She was everything to my children and me. We miss her everyday and the world will always be grey, sad and ultimately meaningless without her. The last few days have been intolerable for us.

“Worst of all was seeing people, including MPs, publicly mock and deride Rose’s death and belittle our pain. My children have therefore asked me to leave politics altogether, for my sake as well as theirs.

“I agree with them. I do not want my wife’s memory and reputation to become a political football. Above all, I always put my family first.”

Mr Paterson admitted his decision to resign was “painful” but “the right one”.

His resignation will trigger a by-election in North Shropshire, a seat he won with a near-23,000 majority at the 2019 general election.

“This has been an unbelievable 24 hours even by this government’s chaotic standards,” he said.

“Only yesterday Boris Johnson was forcing his MPs to rip up the rules on standards in public life is a truly damning indictment of this prime minister and the corrupt government he leads.

“Boris Johnson must now apologise to the entire country for this grubby attempt to cover up for the misdemeanour of his friend.

“This isn’t the first time he’s done this but it must be the last. And Boris Johnson must explain how he intends to fix the immense harm he has done to confidence in the probity of him and his MPs.”

Recent headlines about the Owen Paterson lobbying scandal and the government’s U-turn over his potential suspension have led to claims that Boris Johnson is overseeing a “return to 1990s Tory sleaze”.

There were a series of controversies during the premiership of Sir John Major, who was in Downing Street from 1990 to 1997.

“Sleaze” became a catch-all for various kinds of wrongdoing that emerged, including moral indiscretions and hypocrisy as well as more serious allegations.

A number of MPs and ministers made headlines for the wrong reasons.

It culminated in the “cash for access” scandal, in which MPs Neil Hamilton and Tim Smith were accused of accepting money from a lobbyist to ask questions on behalf of Mohamed Al Fayed, who was the owner of Harrods at the time.

The scandals are considered to have eroded public trust in the Conservatives, who at that point had been in power for well over a decade, and heralded the party’s heavy defeat to Tony Blair’s Labour in the 1997 election.

Liberal Democrat chief whip Wendy Chamberlain said Mr Paterson’s resignation was “a direct consequence of this Conservative government choosing to involve itself in standards business as it did yesterday… but it clearly had not been thought through in terms of the consequences”.

Meanwhile, Labour’s national campaign co-ordinator Shabana Mahmood demanded an apology from the prime minister for the events surrounding the row.

“I think that actually Boris Johnson has got to come forward and apologise to the British people,” she said.

Conservative MP Andrew Rosindell described Mr Paterson’s resignation as a “sad day” and said his fellow Tory politician would be “a huge loss to parliament and to politics in our country”.

“A man of integrity and principle who deserved better than this,” he added on Twitter.

“I regret the way he has been treated. I wish him and his family peace and happier times ahead.”

Fellow Tory backbencher Michael Fabricant expressed his hope that “all the major political parties can now work together to reform the broken system which investigated Paterson’s case”.

“Justice must always be seen to be done and it was not in this case with a one woman judge and jury,” he added.

Minette Batters, the president of the National Farmers’ Union, told Mr Paterson, a former environment secretary, that he had been “an outstanding supporter of British agriculture”.

“I don’t have words to express my extreme sadness at your decision to step down,” she tweeted.

“Thank you so much for all that you have done.”