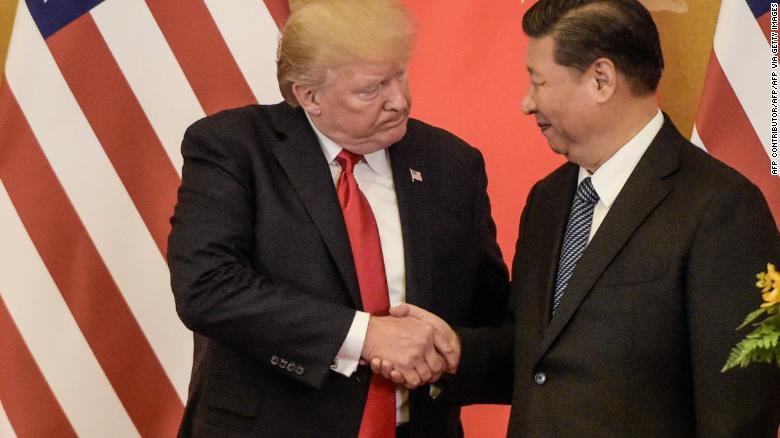 Washington(CNN) President Donald Trump says he has declared war on the coronavirus in an effort to contain the outbreak and its economic impact here at home, but on the world stage, his administration is engaged in another battle as the US and China fight to shape the narrative about the pandemic’s origins.

Trump and senior members of the administration have attempted to brand the outbreak as the result of a “Chinese virus” as they ramp up accusations that Beijing failed to identify, stop or warn about the virus early on.

The administration has also implemented a coordinated messaging campaign which includes talking points sent out by the National Security Council pushing US officials to highlight China’s alleged “coverup” and subsequent disinformation campaign, CNN has learned.

Still, it remains unclear if the administration has a comprehensive strategy in place to counter Beijing’s disinformation push as Chinese officials continue to overtly spread false and misleading information about the virus with little recourse beyond strongly worded statements from US officials.

Tensions have been brewing for weeks between Washington and Beijing over who is to blame for the outbreak. China continues to deny that the virus originated there while top US officials, including Secretary of State Mike Pompeo, have pointed the finger directly at Beijing.

US officials have long been skeptical about information coming from China, including the number of cases it has publicly reported, but the diplomatic row between the two countries has escalated in recent days.

Despite his initial praise for Chinese President Xi Jinping, Trump has struck a more critical tone of late regarding Beijing’s handling of the outbreak and efforts to shift blame onto the US. Trump itching to scale back social distancing after 15 day-period, aides say

Beijing did not hesitate to fire back.

China’s Foreign Ministry spokesperson said Monday that the US is attempting to defame the Chinese government, shift responsibility and find a scapegoat, calling claims by American officials that the virus originated in Wuhan “immoral and irresponsible.”

“I think many people, when the pandemic, first started, thought, this is an opportunity for global cooperation,” Dr. Matthew Kroenig, a former Defense Department and CIA official who now works as a professor at Georgetown University, told CNN.

“What we’ve seen instead is that it’s just become a new arena for this great power rivalry to play out,” he said, adding that autocratic regimes, and China in particular, are using disinformation to try to advance other geopolitical goals, namely positioning itself as a responsible global leader.

The ongoing war of words has been fueled by allegations from top administration officials that China is actively spreading disinformation about the virus’ origins in an effort to cast blame on the US, and other nations, for the current global pandemic. US summons Chinese ambassador over coronavirus conspiracy theory

Earlier this month, China’s ambassador in Washington was summoned to the State Department over a tweet from Chinese Foreign Ministry spokesperson Lijian Zhoa amplifying a growing conspiracy theory that the coronavirus did not originate China and may have been brought there by the US Army.

“When you have the Chinese ambassador and the foreign minister saying through their propaganda machine that the United States military somehow concocted this virus and spread it in China, it’s absolutely false,” Texas Rep. Michael McCaul, the top Republican on the House Foreign Affairs Committee, told CNN in an interview Monday.

“Everybody knows the truth here, and the truth needs to come out. And they don’t want the truth to come out. That’s why they’re starting this disinformation campaign,” he said.

US officials have been closely monitoring China’s disinformation efforts and attempted to push back on the increasing number of false claims from Chinese officials over the last month.

Yet China’s disinformation campaign is ongoing, US officials warn, pointing to comments that were made on Sunday by Chinese Foreign Ministry spokesman Lijian Zhoa in which he suggested the virus started in the US dating back to September 2019 and that those with the flu at that time were misdiagnosed.

In response, the Trump administration has implemented a coordinated messaging campaign which includes talking points sent out by the National Security Council pushing US officials to highlight China’s alleged “coverup” and subsequent disinformation campaign, CNN has learned. How US spy agencies are tracking the coronavirus pandemic

The NSC document containing coordinated talking points, which an administration official told CNN includes input from several agencies, formally acknowledges that more needs to be done to fight Chinese disinformation, especially claims that the US is the actual source of the virus, according to two State Department officials who have seen the cable.

It also echoes concerns that have been repeatedly raised by Pompeo in recent weeks as he and other top administration officials have tried to sound the alarm about Chinese disinformation related to coronavirus.

“There’s been some discussion about China and what they knew and when they knew it. And I’ve been very critical. We need to know immediately. The world is entitled to know. The Chinese government was the first to know of this risk to the world,” the top US diplomat said during Friday’s White House briefing.

Pompeo, along with other Trump allies that include incoming chief of staff Mark Meadows and Arkansas Republican Sen. Tom Cotton, have also attempted to reinforce the idea that the virus originated in China by publicly referring to it as the “Wuhan virus” or “China virus.”

That characterization has also been recently adopted by Trump himself despite push-back from health officials who say the description is misleading and xenophobic. Last week, a photographer spotted Trump changing the word “corona” to “Chinese” in his prepared remarks.

For weeks, several Trump advisers have been urging the President to start taking a harder line on China over its handling of the outbreak, making the case that Trump should cast Beijing as responsible for the spread rather than continue to praise Xi’s efforts, according to two sources familiar.

Initially, Trump refrained from publicly criticizing China despite the advice of key allies in Congress and inside the administration, including Meadows, though he did move to ban travel from China at the encouragement of some Republicans, including Cotton.

“Part of the President’s slow response is that he’s going into an election year, the economy was doing well, and he wanted have this portrayed sense that he was in control and everything was going fine. At a certain point, it became clear that it wasn’t,” according to Kroenig.

“I understand the initial instinct to not want to admit there is a problem but I think in this case, it backfired,” he added, noting that Trump’s initial inclination was to praise China and tout his relationship with Xi, as he’s done in the past.

One source close to the White House told CNN earlier this month that Trump had privately expressed anger toward China but had not yet reached the point of lashing out at Beijing publicly due to concerns that doing so could negatively impact trade talks between the two countries. China wants to take a victory lap over its handling of the coronavirus outbreak

But Trump has appeared to change his tone in recent days, most notably by joining Meadows and other top officials in characterizing the outbreak as a “Chinese virus,” a shift one Republican aide told CNN was likely prompted by Beijing’s disinformation campaign aimed at shifting blame onto the US, and by default, Trump himself.

“I think he does enjoy a relationship with President Xi. He wants the trade, you know, the trade deal to work. At the same time, he recognizes where this virus came from,” McCaul said about Trump.

“You know I don’t call it the Chines virus. I call it the coronavirus or Covid-19. But the fact remains, where did this come from? It came out of the wildlife markets in Wuhan, and it spread beyond control outside of China. For nearly two months, there were many things they could’ve done to contain the virus, and they failed to do that. And I think they need to be held accountable,” the Texas Republican added.

And while the administration is implementing a coordinated messaging campaign aimed at criticizing China for a coronavirus “coverup,” Trump’s comments Sunday during a task force briefing indicate that he may still be trying to walk a careful line in his criticism of Beijing.

When asked about China, Trump said he was not happy with China but then turned and touted the amount of US agricultural products Beijing continues to purchase amid the outbreak.

Asked about the difference between Trump’s rhetoric and that of several top advisers, one US official noted that the President has often tried to employ a “good cop, bad cop,” strategy in dealing with foreign countries and that appears to be the case with regards to coronavirus.

However, Kroenig told CNN that the gap between Trump and his top advisers is “pretty consistent with what we’ve seen in the administration over the past couple of years with a fairly traditional in some ways, administration and then a very unconventional president at the top.”

“The administration seems to be on board with the strategy of pushing back against … Chinese claims whereas the President still seems to have his head in a somewhat different space and is looking for a cooperation with these major autocratic powers,” he said.