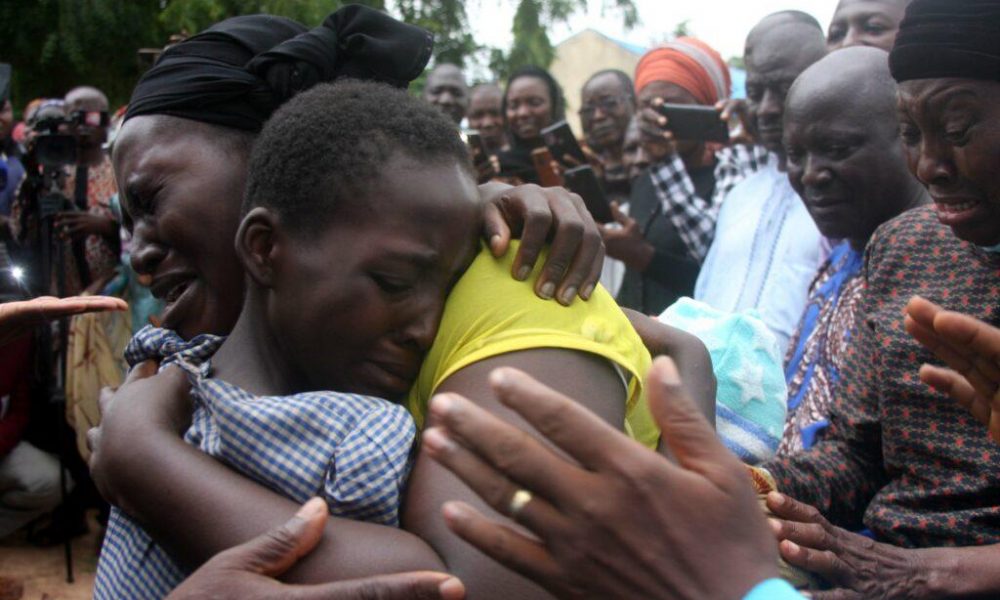 Twenty-eight students of the Bethel Baptist High School, Kaduna, were released on Sunday after spending 20 days in bandits’ den.Those who regained their freedom were among the 121 students who were abducted when bandits invaded the school on July 5.

It was gathered that the bandits released the students after collecting N50m as ransom.

On Sunday, there was panic among the parents of the remaining students as the Nigerian Baptist Convention said 87 schoolchildren were still with the bandits.

In Kebbi State, parents of the 83 students of the Federal Government College, Birnin Yauri, who were still in captivity since their abduction 40 days ago, have said that their abductors were insisting on the release of their colleagues arrested by security agents.About 136 pupils, who were abducted from an Islamic school at Tegina, Niger State in May, spent 54 days in bandits’ den on Sunday.

In Kaduna State, there were mixed reactions as bandits released 28 students of Bethel Baptist High School, Damishi in the Chikun Local Government Area of the state. It was gathered that the bandits demanded a N60m ransom, but N50m was raised by the school and some parents who contributed what they could afford.Some parents, whose children were not released, were anxious over their safety.

A parent whose daughter was not released said that they were surprised that the bandits were still keeping 87 students.He said, “The school and some parents raised N50m. Some parents contributed the amount they could afford. The bandits told the school to bring the money to a designated place. The money was taken to them. We thought they would release all the students, but we were surprised when only 28 were released. My daughter is among those still in captivity. I am praying for her safety.”The PUNCH had ,on Friday, reported that the bandits contacted the management of the school and demanded more food items.

Also on Friday, it’s been reported that the NBC had contacted some of its chapters to raise the ransom demanded by the bandits.The President of the NBC, Rev Israel Akanji, had, in an interview with punch, said, “We have been boxed in; we have been given no option but to look for ways to rescue the children.”

But contrary to the claim of those who said the bandits were given N50m, Akanji in an interview with journalists on Sunday said no ransom was paid by the church.

Most of the 28 students, who regained their freedom after spending 20 agonising days in their captors’ den, looked pale, while others had rashes all over their bodies on Sunday.

At exactly 11:21am on Sunday, the students arrived in the school premises amidst songs.Bandits said they would release students in batches.

While addressing the parents, some of whom arrived at the school as early as 7am, the Proprietor of the school, who is also the President of the Kaduna Baptist Conference, Rev. Ishaya Jangado, said the bandits stated that they would release the abducted students in batches.

Jangado, therefore, appealed to the parents to bear with the management of the school and remain calm, noting that the “good Lord who started the work, will complete it. “God has answered our prayers.

By the grace of God, I have been talking to these people (bandits) and they told me they would be releasing the children in batches. Are you getting me? They are in batches and they have released the first batch. I am trusting God that very soon again, others will come.“So, please, I am begging you, calm down. This good work that the Lord has started, He will complete it. We never knew we would be here today but God has proved Himself to be faithful.”

Hope not lost, CAN appeals to parents of students still in captivity

On his part, the Chairman of the Christian Association of Nigeria in the state, Rev. John Hayab told the parents to exercise some patience as the leaders of the Baptist Church were doing everything humanly possible to see to the release of all the students.
Hayab said, “Please if your child or children are not among the first batch released, hope is not lost yet.“We are going to celebrate the return of these children in batches. So, we are celebrating with the first 28 parents and we shall celebrate with the other ones shortly and likely even with all.
“The Lord will do it. So, please, don’t be confused and don’t say things that tomorrow, you will not like it.”I can’t speak for others involved, but we didn’t pay any ransom, we’re against it, says NBC president

Speaking to journalists shortly after reuniting the released students with their parents, President, NBC, Akanji, assured parents that all the students would soon be reunited with them.Akanji said that with the release of the students, 87 students were still in the custody of the k

kidnapper.
He reiterated the Church’s stance against payment of ransom to kidnappers, debunking claims that a N100m or N60m ransom was paid before the students were set free by the bandits.