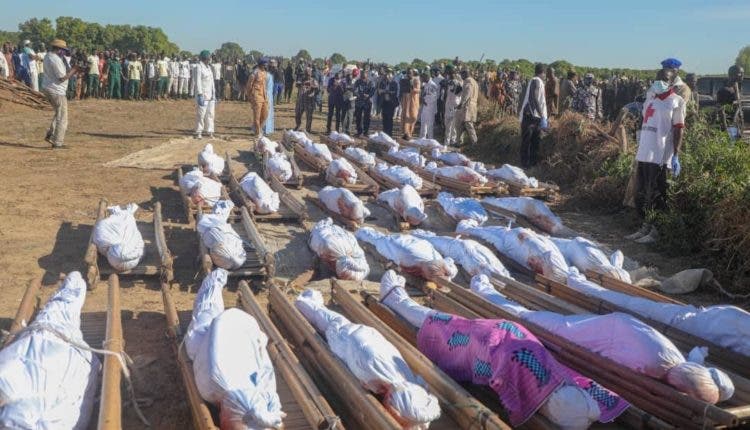 Saturday’s killing of rice farmers at Kwashebe by Boko Haram insurgents in  the  Jere Local Government Area of Borno State attracted strong condemnations from eminent Nigerians and groups on Sunday.

The AFP had on Saturday reported that the insurgents attacked  Kwashebe and killed no fewer than 43  rice farmers.

The terrorists were reported to have tied up the farmers, who were working on rice fields, before slitting their throats.

Although a member of the state Civilian Joint Task Force, Babakura Kolo, who assisted some of the survivors, put the number of people killed at 43,  the United Nations on Sunday said 110 rice farmers lost their lives during the attack.

Groups and individuals, including All Farmers’ Association of Nigeria;   the President of the Senate, Dr Ahmed Lawan; the Speaker of the House of Representatives, Femi Gbajabiamila and the Coalition of Northern Groups, lamented that the attack would affect food security in the country.

On Sunday, the UN shed more light on the attack,  contrary to earlier reports, it said 110 civilians were killed by Boko Haram.

The UN Humanitarian Coordinator in Nigeria, Mr Edward Kallon, who disclosed this, also said, many other persons were injured in the deadly attack by the terrorist group.

Also, the Amnesty International in a tweet on Sunday disclosed that 16 of the victims were internally displaced persons.

He disclosed that the afternoon attack was carried out by armed men on motorcycles, who murdered men and women, who were harvesting their fields in Kwashebe and other rural communities in the Jere Local Government Area.

Kallon, while condoling with the government and people of Nigeria, also said many women might have been kidnapped during the attack.

He noted, “We have also received reports that several women may have been kidnapped. I call for their immediate release and return to safety. My thoughts are also with the rural communities in the area, who are shocked by the brutality of yesterday’s (Saturday’s) attack and fear for their safety.”

“The entire UN system and the humanitarian community working to provide life-saving and development assistance to the most vulnerable in Borno State are outraged by the incident. Such direct attacks against innocent civilians jeopardize the ability for the most vulnerable people to survive the adversity they are facing, and which we are striving to alleviate.”

The UN described the incident as “the most violent direct attack against innocent civilians this year,” and called for the perpetrators to be brought to justice.

“It is, unfortunately, one of too many such attacks targeting farmers, fishermen and families who are trying to recover some livelihood opportunities after over a decade of conflict. I strongly condemn this attack and any act of violence against innocent civilians and I firmly urge all actors on the ground to respect international laws and humanity,” the UN official stressed.

The global organisation observed that rural communities in Borno State were facing untold hardships, adding that helping them to farm land and rebuild livelihoods were amongst the UN priorities and the only way to avoid the looming food crisis in the state.

It said civilians needed to be protected and spared from any kind of violence.

The statement read, “Innocent women, children and men desperately need food and other support and assistance, particularly at a time when we are recording some of the highest levels of food insecurity in Borno State. We owe to do our utmost to help them survive these difficult times.”

Meanwhile, the Amnesty International has said that 10 women working in the rice farms where Boko Haram slaughtered 110 persons are still missing.

The organisation in a tweet on Sunday stated that 16 out of the victims were IDPs.

It read, “Boko Haram and other armed groups must renounce their unlawful and vicious campaign of violence against civilians. The Nigerian authorities, for their part, must do more to protect civilians and bring the perpetrators of all such attacks to justice.

“Amnesty International’s findings show that, of the 43 farmers slaughtered by Boko Haram yesterday, 16 were Internally Displaced Persons resident at Farm Centre IDP Camp while 10 women working in Kwashebe rice farm are still missing after the attack.”

A resident,  Hassan Mohammed, in an interview with one of our correspondents,  said  insurgents met the farmers at their rice fields  and gathered them at  Kwashebe, a village four  kilometres from Zabarmari. He said the insurgents shot some of them and slaughtered others.

Another resident, Labbo Tahiru disclosed to The PUNCH that almost all the people in  Zabarmari, Kaddamari and surrounding villages were rice farmers.

He said, “We are rice farmers in this locality. We have not had this tragic experience before, although we have had some encounters with these insurgents.”

According to him,  before the attack, there were intelligence reports indicating the terrorists were planning the attack, but soldiers only embarked on their regular patrol in the area.

“Soldiers went round the area to patrol in their vehicles. It was after they had left that the terrorists attacked the innocent farmers.”

On Sunday,  the murdered farmers were given a  mass burial at Zabarmari, 20 kilometres from Maiduguri.

The burial was attended by the Borno state Governor, Prof. Babagana Zulum.

In his address after the burial,  Zulum said the security situation in the communities must improve.

He stated, “We shall recruit more of our youths into the volunteer services and mobilise them to take the fight to the terrorists especially around Zabarmari axis so that the entire population of this locality can be secured.

Zulum, who said more than  43 people must have been killed, stated, “This is very sad. We are still appealing to the Federal Government to ensure recruitment of more of our youths into  the CJTF (civilian joint task force) and hunters into the Nigerian military so that they can form part of the agro-rangers that will protect farmers.”