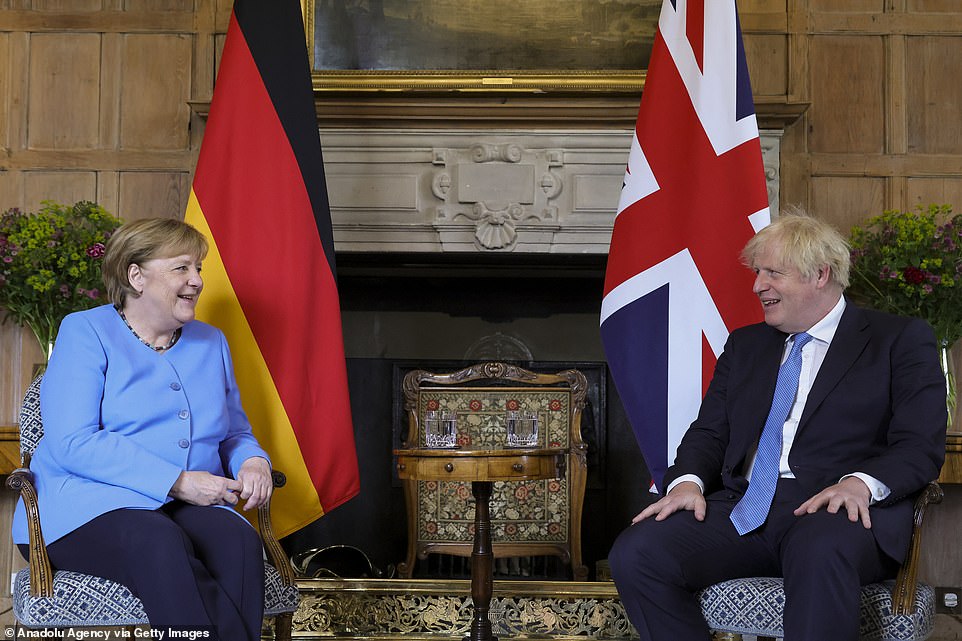 Angela Merkel today backed down in a row over coronavirus travel rules as she said in the ‘foreseeable future’ fully-vaccinated Brits will be able to visit Germany without having to quarantine.

At the moment all UK travellers have to self-isolate on arrival in Germany for 14 days, with no exemptions.

But Mrs Merkel said that soon double-jabbed people ‘will be able to travel again without having to go into quarantine’.

Her comments today, following bilateral talks with Mr Johnson on the subject, pave the way for quarantine-free travel to open up across Europe in a massive boost for vaccinated British holidaymakers.

Meanwhile, Mr Johnson used the same press conference to attempt to sooth the holiday fears of up to five million Brits over whether the AstraZeneca vaccine batch they received will be recognised by European countries.

The European Medicines Agency (EMA) does not recognise a version of the vaccine produced by Covishield at the Serum Institute of India (SII), even though it is just as effective as AstraZeneca doses made elsewhere.

Holidaymakers given this vaccine could therefore be refused entry at EU border crossings when batch numbers are checked on digital Covid passports.

But countries including Greece, Spain, Austria, the Netherlands, Estonia, Germany, Slovenia, Iceland, Switzerland and Ireland have all confirmed they plan to accept the jab and Mr Johnson said he is ‘very confident’ the issue ‘will not prove to be a problem’.

It came as Mrs Merkel congratulated the England football team and wished the nation luck after it beat Germany in the last 16 of the Euro 2020 tournament.

She said England ‘deserved’ to win the match on Tuesday but admitted she was ‘a little bit saddened’ by the 2-0 defeat.

However, she expressed ‘grave concern’ over the number of fans allowed to attend games at Wembley Stadium but Mr Johnson said matches were going ahead in a ‘very careful and controlled manner’.

Meanwhile, both leaders expressed optimism over the UK and the EU being able to solve post-Brexit problems relating to the Northern Ireland Protocol as Mrs Merkel said she believes ‘pragmatic solutions’ are possible.

Today’s trip will be Mrs Merkel’s final visit to the UK as German Chancellor as she prepares to stand down later this year.

Following her summit with Mr Johnson, Mrs Merkel travelled to Windsor Castle for an audience with the Queen.