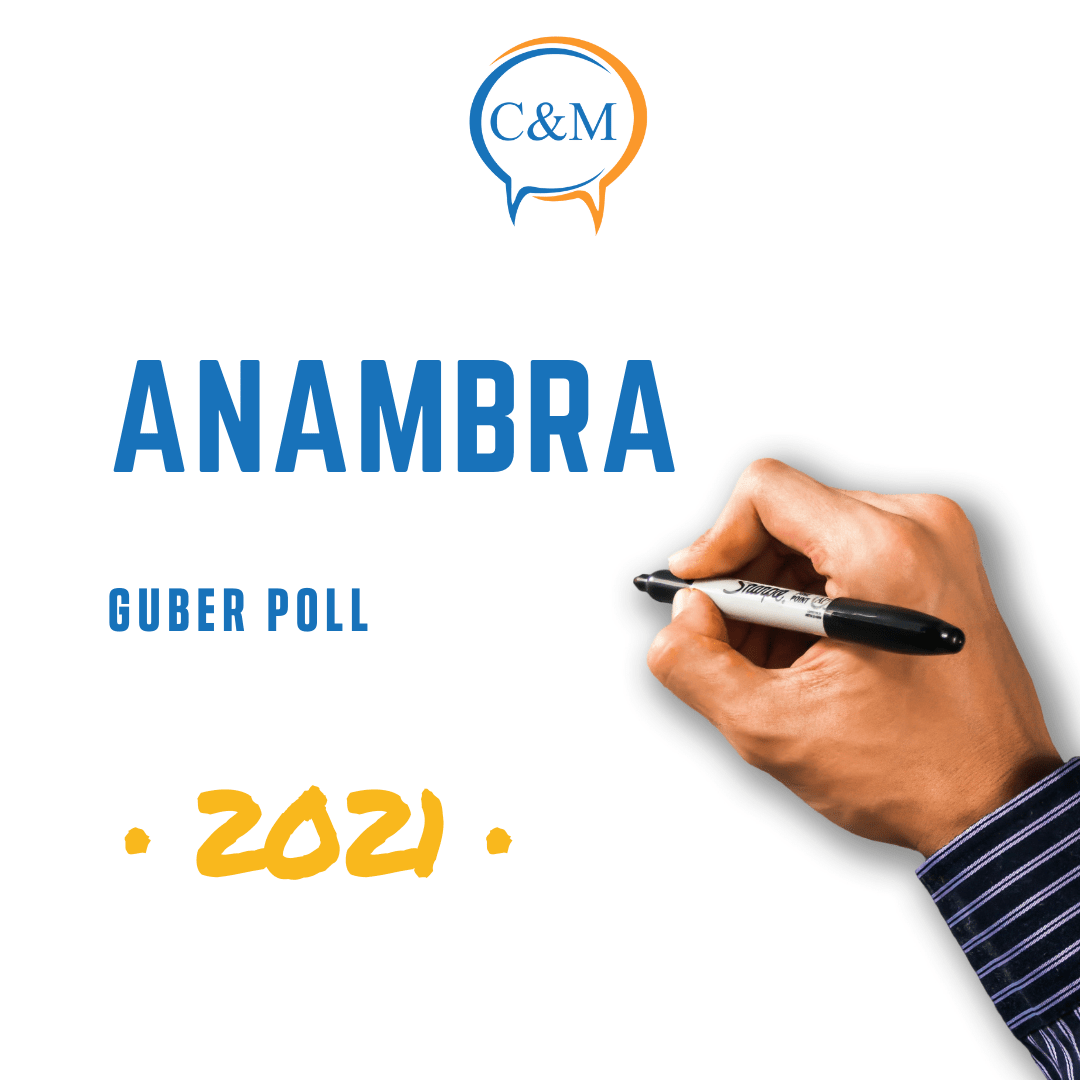 A few estimated analysis have been established following the recent research conducted by Cater and Merger Centre for Leadership and Good Governance; rightly in the areas of Anambra’s current security state, voters and vote systems, gubernatorial candidates, political parties and more.

As massive preparations to the upcoming election to unveil who will be the next Governor fit for the Ndi Anambra intensifies, primaries and the ensuing litigation finally came to an end from July to September 2021.

2. Prof. Chukwuma Soludo of the All Progressives Grand Alliance (APGA)

3.Sen. Andy Uba of the All Progressives Congress (APC).

7. Dr Godwin Maduka of Accord Party

In this concluded independent poll by C&M Centre for Leadership and good Governance on the Anambra Gubernatorial election and in what looks like almost an excellent percentage of readiness by Nigerian citizens, the public have aired their view, unveiling their preferences and opinions on the November 6th poll.

Below is a summarised analysis of the research conducted by Cater and Merger Centre for Leadership and Good Governance:

According to the data provided in the summarised survey by the research just concluded by the C&M Centre of Leadership and Good Governance, put in context, over 88. 4 % noted that they are registered voters. This confirms INEC’s statistics of the total number of registered citizens rising to over one million persons who completed their physical registration in the ongoing nationwide continuous voter registration (CVR).

THE STATE OF SECURITY

Security has remained a major challenge to Anambra 2021 Gubernatorial Election preparations. Potential causes for possible delay can be seen by the recent activities of Unknown Gunmen in South-eastern States which has caused a lot of tension within the state.

Will the general election be shifted?

The Anambra governorship election is expected to take place on November 6 but multiple violent attacks in the state have cast a doubt on if the poll will take place as scheduled.

In addition, Police Stations, INEC offices and politicians have been attacked by unknown gunmen.

These attacks may affect the forthcoming gubernatorial election in Anambra State if these unknown gunmen are not prevented from carrying out their activities within the state.

The activities of the Indigenous People of Biafra, enforcing sit-at-home orders throughout the Southeast has also raised further Concerns; the Centre for Democracy and Development CDD warned against the sit-at-home orders and the potential of IPOB violence against people dismissing the order could lead to low turnout and electoral violence; also warning about mass misinformation campaign to target and deceive voters.

Consequently, Anambra State is not in the usual election mood. It is in the light of the security situation in the State that the Commission held an emergency meeting of the Inter-Agency Consultative Committee on Election Security (ICCES) on the first week of October.

A STATE OF EMERGENCY

Owing to the violent attacks, the federal government had threatened to declare a state of emergency in the state, but that position has been faulted by the state government and socio-cultural groups.

The Independent National Electoral Commission (INEC) had said although the commission is worried by the attacks in the state, it is determined to conduct the election as scheduled

It’s important to recall that these heinous attacks have truncated the campaigns of some of the Governorship aspirants and political parties, making voter mobilization and sensitization impossible.

Abubakar Malami (Minister of Justice) disclosed that the insecurity level across Anambra state is quite appalling and further revealed that Buhari’s administration will not allow hoodlums to overtake constitutional order in the nation and threatens to declare a state of emergency in Anambra state before the gubernatorial elections in the state.

In his words: “Nevertheless, I believe that this threat made by Buhari’s Govt to declare a state of emergency in Anambra State may be a good move.”

Positivity: Declaring a state of emergency in Anambra State will increase the presence of military officers within the state, preventing unknown Gunmen from carrying out their attacks in the state and equally boosting the confidence of residents to do their businesses without fear in Anambra State.

This action will also increase the morale of gubernatorial candidates in Anambra State to conduct their campaign ahead of the Governorship election in the state.

As the election nears, INEC also announced its preparations, stating its intentions to maintain a successful, safe and violence-free election.  Furtherance to curb insecurities and ensure the smooth conduct of the forthcoming governorship election, heightened security agencies would be deployed to protect voters, election staff, election observers, the media, transport providers and candidates during the election. Already, security around INEC facilities in the State has been ramped up and at least 25,000 INEC officials to be deployed on the election day.

In its determination to eliminate the possibility of voting by identity theft using another person’s Permanent Voter’s Card (PVC) during an election, the Independent National Electoral Commission (INEC) has concluded plans to introduce the Bimodal Voter Accreditation System (BVAS) for the forthcoming Anambra governorship election.

In accordance with the analysis of the Centre for Leadership and Good Governance, over 70% trust the electoral transmission of votes for the 2021 Gubernatorial  election against 29.41% who do not.

Festus Okoye, INEC’s commissioner for information and voter education, disclosed that the BIMODAL VOTER ACCREDITATION SYSTEM (BVAS) technology usage would be adopted instead of the usual smart card readers for the November 6 Anambra governorship election and results would be transmitted electronically.

What is BVAS technology? Technological convergence

Bimodal Voter Accreditation System (BVAS)  is an  advanced multi-functional device technology used specially  for voter enrollment — the continuous voter registration exercise and accreditation of voters. This combines the functions of both the Z-Pad and the Smart Card Reader (SCR) for BVAS, which entails the fingerprint and facial authentication on election day.

With this electronic system, it will be impossible for any voter to use another person’s PVC to cast his or her ballot on election day. This is because a prospective voter must successfully scale through either the fingerprint or facial authentication process before being allowed to vote.

After the election, the same technology or device is then used for uploading polling unit results into INEC result viewing portal.

NIGERIA: THE DEBT COLLECTORS HAVE COME TO FIND A COUNTRY SUFFERING FROM A HANG-OVER