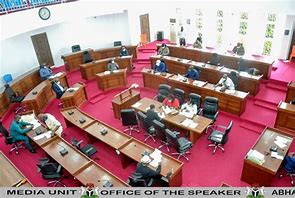 The House passed the resolution yesterday during Plenary under a Motion brought to the floor by Hon Emeka Okoroafor (Isuikwuato).

“The welfare and the security of the people are the primary responsibilities of every government including the Local Government authorities. Security challenges of kidnapping, banditry and farmers-herders conflicts in our various Local Governments and communities are on the increase.

“The issue of security in the rural areas is a shared responsibility between the Traditional Institution, community vigilante groups and the conventional security agencies”, Hon Okoroafor explained.

He further said that the 5% provided for in the aforementioned Local Government Law was for the effective discharge of this shared responsibility by the Traditional Rulers as Chief Security Officers of their respective communities among other things.

Concluding, Honourable Okoroafor said it appeared that the Traditional Rulers had failed in the discharge of this important responsibility because of paucity of funds, traceable to failure of the Local Government authorities to release the said statutory 5% to the Traditional Rulers Council which, in turn, is a flagrant disobedience and infraction of a valid Law and that the infraction and non-implementation of provisions of the said Law had greatly and adversely affected attempts at curtailing the seemingly unending security challenges in the communities, positing further that the issue has constituted an impediment in the efforts of the Traditional Rulers and that of the State Government to rid the State of all forms of criminality.

After contributions to the matter by lawmakers, the Speaker said of particular interest to him was the non implementation of a Law passed by the Assembly.

He therefore asked the Clerk to invite Hon Ibe Nwoke, the Abia State Chairman of Association of Local Governments of Nigeria (ALGON) to appear before the Honourable Members in their Executive session to explain to the House why a Law passed by the House and assented to by the Governor was not being implemented.

The House also resolved and mandated the Executive Chairmen of Local Government Areas in the State to subsequently make necessary deductions during their JAAC for the purposes of giving the Traditional Rulers their constitutional percentage so they could help tackle insecurity in their areas.

Finally, the Speaker said the House approves all the resolutions contained in the motion moved by Hon Emeka Okoroafor.