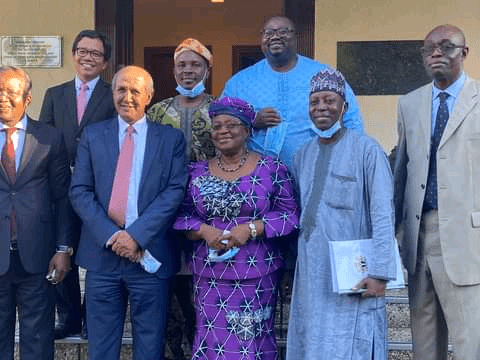 Abdulhamid Adamu, Nigeria’s ambassador to the World Trade Organisation bagged a master’s degree in Business Management and Leadership and PhD from diploma mills.

On Wednesday, President Muhammadu Buhari approved the appointment of Adamu as Nigeria’s Ambassador to the World Trade Organisation for four years.

The appointment was contained in a letter sent by the Office of the Chief-of-Staff to the President, Ibrahim Gambari, to the Minister of Industry Trade and Investment, Niyi Adebayo.

Until his appointment, Adamu was the Acting Head, Chargé d’ Affaires of Nigeria Trade Office to the WTO, Geneva, Switzerland.

“He holds an Msc. in Economics and International Development from Clermont Ferrand University, France, a master’s degree in Business Management and Leadership from London Graduate School, UK, and a Doctorate of International Relations and Economic Diplomacy from the Commonwealth University, UK.

“He has acquired 28 years of working experience on World Trade matters and Trade Negotiations and was the campaign coordinator of Okonjo-Iweala in Geneva, Switzerland when she was vying for the position of the DG of WTO,” a report by Punch stated.

But from checks, the London Graduate School from which Adamu earned a master’s degree in Business Management and Leadership, is purely a degree mill.

A diploma mill (also known as a degree mill) is a company or organisation that claims to be a higher education institution but provides illegitimate academic degrees and diplomas, which are fabricated, falsified, or misrepresented, for a fee.

It was also observed that the London Graduate school has two websites, londongs.co.uk and lgsglobal.uk.

It was stated that the institution teaches degree programmes of ‘UNESCO listed Universities but does not grant its own degrees’.

There was no such notice on the second website which claims to be in partnership with the University of Chichester.

However, a simple check on Chichester’s website showed that it had no partnership with any London Graduate School.

The Commonwealth Open University from which Adamu earned his Doctorate of International Relations and Economic Diplomacy has also been recognised as a diploma mill.

From checks, it shares the same address with the London Graduate School, situated at Mayfair Point, 34 South Molton Street,London.

The two institutions claim to have earned the UNESCO Learning Badge for advancing the internationalisation of education but neither of the institutions is traceable on the British government’s online portal (https://www.gov.uk/check-university-award-degree/recognised-bodies) where prospective students can browse for accredited tertiary education institutions in the UK.

Previous reports on the notoriety of both diploma or degree mills showed that they award higher degrees for as low as £6k (N3 million).

Operators of diploma mills send personal invitations to dignitaries offering them an honorary doctorate degree from the ‘institution’.

Awardees are simply required to participate in a seminar at a designated location at which an honorary doctorate from the institution would be conferred usually at the end of a three-day “workshop”.

Awardees are charged an estimate of £6, 000 to cover course materials, lunch, snacks, among others.As of March 2019, the National Accreditation Board (NAB) of Ghana alerted its citizens that the Commonwealth University And London Graduate School, UK have not been accredited by the relevant body to award any form of degree.

The NAB also warned distinguished personalities who accept degrees from such institutions to desist from such or do so at their own peril.

It advised citizens to verify the accreditation status and degree-awarding powers of the institutions that seek to confer on them honorary degrees to avoid any embarrassing fallouts.