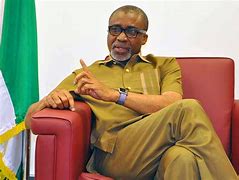 Senate Minority Leader, Enyinnaya Abaribe, has urged the Federal Government to embrace caution and strict adherence to the rule of law in the handling of Nnamdi Kanu’s issue.

The Senator in a statement released by his Media Adviser, Uchenna Awom, in Abuja on Wednesday, also advised the federal government to be guided by the provisions of Section 31 of the 1999 Constitution of the Federal Republic of Nigeria as amended and Article 4 of the African Charter on Human and People’s Rights.

Kanu was on Tuesday remanded in DSS custody by the Federal High Court as the Federal Government re arraigned him and re-arraiged in continuation of his trial.

Abaribed said the said the relevant section and charter presupposes that the detainee should be humanely treated while in the custody of the state.

“What it means is that it is the duty of the government in this instance to protect him and ensure the respect of his fundamental human rights while his trial lasts. For now, it is trite law, that he is presumed innocent until proven guilty,” Abaribe said.

However, the Minority Leader called for calm saying that the recent events presents ample opportunity for dialogue and for the federal government to address the contending issues that seems to challenge the peace and unity of the country.