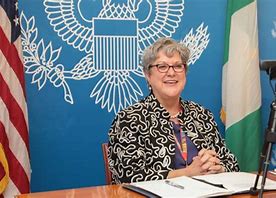 The United States has assured Nigeria that a repeat of what happened in Afghanistan won’t happen in the West Africa country.

The US Ambassador to Nigeria, Mary Leonard, gave the assurance on Monday during a meeting in Abuja.

The ambassador explained that Nigeria and Afghanistan’s situations are not the same.

Some Nigerians had warned the President, Major General Muhammadu Buhari (retd.), against a repeat of what happened in Afghanistan, where the Taliban took over the country.

They expressed fear that the situation in Afghanistan may serve as a morale booster for Boko Haram in Nigeria to take over the country.

After over 20 years the US military announced the departure of the last US troops from Afghanistan Monday, with the Taliban seizing control of the country.

US troops led a NATO coalition to eject the Taliban from power in 2001 after the September 11, 2001 attacks on the United States by Al-Qaeda, which was based in Afghanistan and protected by the Taliban.

Leonard noted that Nigeria has had a strong bilateral relationship with the US, saying that the situations are not the same.

While allaying fear that the US partnership with Nigeria might end up like that of Afghanistan, she added, “I hear people making the analogy with Afghanistan a lot, it does not match up.

“When you listen to what President Biden said on how troops went to Afghanistan in the first place, it was because they were in a horrible tragedy, over 3,000 Americans were killed.

“That is a different construct. The sovereign nations who have had strong bilateral relations. I don’t actually think the two match up.”

Former presidential aide, Reno Omokri, had warned the Nigerian Government to guard against a repeat of what happened recently in Afghanistan to happen in Nigeria.

Omokri, who prayed to God not to allow Boko Haram to achieve in Nigeria what Taliban achieved in Afghanistan, warned that the foreign country first witnessed what is happening in Nigeria before the insurgents took over.

He wrote, “75, 000 Taliban soldiers defeated 300,000 Afghan government troops. A four to one disadvantage. How did it happen? Many lessons for Nigeria. Soldiers who believe they fight for God eventually defeat soldiers that fight for salary. Yet, we continue to spend billions rehabilitating so-called repentant Boko Haram. There is absolutely no discernible difference between the ideology Taliban and Boko Haram.

“May Boko Haram not achieve the same in Nigeria. May what befell Afghanistan not befall Nigeria. Because what is happening in Nigeria today first happened in Afghanistan.”

Anambra Guber poll: Soludo to be challenged by Ozigbo and Uba