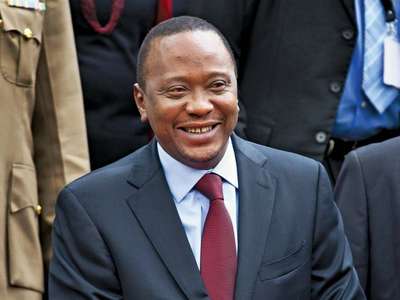 The talk will respond to the major challenges highlighted in the United Nations Secretary General’s Our Common Agenda report.

President Kenyatta will dwell on how global cooperation and multilateralism can be deployed effectively to solve the major interlinked climate, security, economic and public health challenges that threaten so many around the world.

He will also share his insights on the world-wide challenge of building and sustaining states that have the ability to solve major challenges, including the maintenance of cohesion, peace and security.

His Excellency President Hon. Uhuru Kenyatta, C.G.H., is the fourth President of the Republic of Kenya and the party leader of the ruling Jubilee Party.He has previously served as a nominated Member of Parliament, Leader of the Opposition, Minister for Local Government and Deputy Prime Minister and Minister of Finance.

President Kenyatta was re-elected for a second and final term in August 2017. His presidency has been underpinned by a commitment to economic and social transformation, national unity, good governance, regional integration, and intra-Africa trade.Under President Kenyatta’s leadership, Kenya has become one of the fastest-growing economies in sub-Saharan Africa and ranks among the top three African countries on the ease of doing business.

Kenya has consolidated its position as a leader on issues such as Climate Change, the Blue Economy and digital technologies and Nairobi has emerged as a regional hub for major international organizations and corporations. Kenya.

In January 2021, Kenya started its two-year term as an elected member of the United Nations Security Council.Following the promulgation of a new Constitution in 2010, President Kenyatta presided over the rolling out of an ambitious program to restructure the Kenyan state involving large-scale political, fiscal, and administrative decentralization.

At the regional level, President Kenyatta has championed regional integration, intra-Africa trade, and a stronger role of the African continent on the global stage. He has been at the forefront in promoting peace and security efforts in the region and has brokered peace agreements in South Sudan and the Democratic Republic of Congo.President Kenyatta has Chaired the African Union Peace and Security Council in March of 2021 and is the current Chair of the Summit of East Africa Community Heads of State. He is also Chair of the African Leaders Malaria Alliance (ALMA) a coalition of African Union Heads of State and Government to drive accountability and action for results against Malaria, Neglected Tropical Diseases (NTDs), Reproductive, Maternal, Neonatal, Child, and Adolescent Health (RMNCAH) and nutrition.

President Kenyatta is the current President-in-Office of the Organization of the African, Caribbean and Pacific States (OACPS) which comprises 79 African, Caribbean, and Pacific states. He is also a member of the High-Level Panel for Sustainable Ocean Economy, a unique initiative of 14 serving world leaders to build momentum towards a sustainable ocean economy.

President Kenyatta serves as a Global Leader for the Young People’s Agenda under the UN-led Generation Unlimited Initiative (GenU) which seeks to ensure that by 2030 all young persons aged 10-24 are in school, in training or employment.

This event will be moderated by Zeid Ra’ad Al Hussein, President and CEO of IPI.