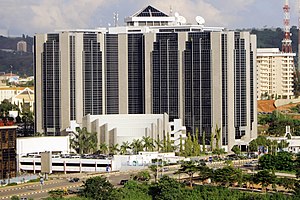 The Federal Government has disregarded the Central Bank of Nigeria Act (2007) as it moves to restructure its estimated $25.6 billion (an equivalent of N9.7 trillion) overdrafts with the monetary authority into a 30-year debt.The amount, which sources said is unverifiable and could have been discounted following the high level of secrecy around the processes leading to the loans, consists of the existing short-term advances granted by the apex bank.Government may have, by the facility restructuring, heeded the warning by International Monetary Fund (IMF) and Fitch that the mounting overdrafts were responsible for the accelerating inflation, which hit 16.47 per cent in January.Like its procurement process, the planned loan liquidation faces major legal hurdles, among which is the CBN Act 2007 that spells out how advances extended to government should be treated as well as repayment processes.Section 38 of the Act stipulates that the apex bank “may grant temporary advances to the Federal Government in respect of temporary deficiency of budget revenue.” It, however, restricts the amount to five per cent of the previous “year’s actual revenue of the Federal Government.”

The 10 trillion naira ($25.6 billion) debt will be exchanged for 30-year notes issued to the central bank, Patience Oniha, head of the Debt Management Office said by email.

Nigeria’s federal government has set the terms for the conversion of its stock of central bank overdrafts into long-term notes in a bid to create transparency around its dependence on that source of funding.The 10 trillion naira ($25.6 billion) debt will be exchanged for 30-year notes issued to the central bank, Patience Oniha, head of the Debt Management Office said by email. The agreement on timing for the conversion needs to be finalized to get the required approval from the cabinet, at the earliest in the second quarter, Oniha said. The Nigerian government became dependent on central bank borrowing after oil prices collapsed in 2015. Earnings from crude sales account for about half of government income in Africa’s largest economy. The financing helped plug spending shortfalls as non-oil revenues failed to cover the gap created by lower earnings from crude exports.The increasing reliance on CBN overdrafts has come with negative consequences, the International Monetary Fund said in a report published last week.“The financing is costly for the federal government at interest rates of the monetary policy rate plus 300 basis points, and for the CBN, with sterilization done through issuance of open market operation bills,” the IMF said.The converted debt will be amortized over 30 years starting with a two-year moratorium when the government will not pay anything, Oniha said. The central bank will decide whether the securities will be sold to the public.Rising DebtThe conversion will add to Nigeria’s debt stock, which stood at 49 trillion naira at the end of last year, according to estimates by the IMF. Public debt, including the central bank overdrafts, as a proportion of gross domestic product rose to 34.4% in 2020 from 29.1% in 2019, IMF data shows. The fund forecasts the debt to GDP ratio will remain largely unchanged until 2023 when it will rise to 35.5% of GDP.Finance Minister Zainab Ahmed and central bank Governor Godwin Emefiele last year agreed to end CBN overdrafts to the government by 2025 in a letter of intent to the IMF before the release of emergency financing. However, Emefiele rebuffed criticism on the danger of the practice by Fitch Ratings, saying it would be irresponsible not to finance the government when revenues drop.Money printing in Africa’s most populous nation has increased the excess liquidity in the system, and pressured the naira to be devalued twice, with inflation jumping to a four-year high in January.There will be strict adherence to the statutory limit of the central bank overdraft to the government going forward, which is 5% of the preceding year’s revenue, Oniha said.“There is a statutory limit, but it is then a question of if it is being implemented. Let’s clean the books and going forward the intention is to comply,” she said at a meeting with market players last week.Raised LimitIn a strategy paper released last week, Africa’s biggest crude producer raised the amount it could borrow as a proportion of GDP to 40% from 25% to accommodate its growing debt portfolio and stimulate an economy that is recovering from its second recession in four years.The government will borrow mainly from domestic markets, while external debt will be raised mainly from multilateral and bilateral lenders, according to the debt office head.The government is seeking to raise the dollar equivalent of 2.3 trillion naira in offshore markets and will consider issuing a Eurobond depending on market conditions.