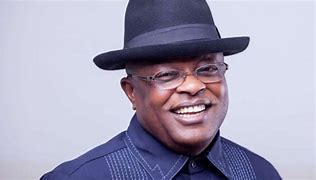 Gov. David Umahi of Ebonyi on Wednesday suspended five permanent secretaries in the state civil service for six months over alleged lack of commitment to duties.

The governor announced that the affected permanent secretaries who would be sent for retraining were those in charge of the ministries of health, education, communication, sports and solid minerals.

“The Secretary to the State Government (SSG) and the commissioner for human capital development should organise six months training for them which I would sponsor.

“They should be taught what a permanent secretary is, how to prepare memorandum and how to take responsibilities in their ministries.

“The SSG and the acting Head of Service should identify ministries without permanent secretaries and fill such positions with the most intelligent official in such ministries.

“The official can be on grade level 10 but would be promoted to level 14 because I need help in the ministries,” he said.

He noted that underperforming permanent secretaries would henceforth be demoted by two grade levels and disengaged from the system.

“The permanent secretary is the real owner for the ministry and the issue with the suspended ones was not dullness but lac of commitment,” he said.

Umahi congratulated the newly-sworn in commissioners and noted that he would admonish them during the state executive council meetings.

The News Agency of Nigeria (NAN) reports that nine out of the 11 sworn-in commissioners retained their positions, while two were assigned new portfolios.

Chief Clement Nweke, Commissioner for Housing thanked the governor for reappointing them and pledged to redouble their loyalty and commitment to the cause of governance.