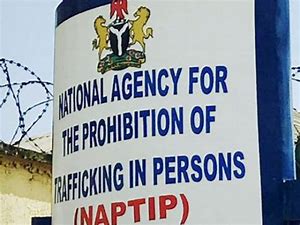 The National Agency for the Prohibition of Trafficking in Persons (NAPTIP) says it has bursted a notorious child trafficking syndicate in the Federal Capital Territory and arrested a suspect.

The agency said this in a statement by the head of its Press and Public Relations Unit, Mrs Stella Nezan, in Abuja on Monday.

The statement also said the operatives of the agency were able to rescue four children from one Mrs Blessing-Nnena Eze, suspected to have stolen the children.

Sulaiman-Ibrahim stated, “This is a wicked act that must be condemned by all. These innocent children are exposed to the harsh weather condition by the traffickers, who shade them like wares by the roadside, while soliciting money to satisfy their selfish desires.

“The Director General of NAPTIP, Mrs Imaan Sulaiman-Ibrahim, has ordered an improved surveillance in the notable spots, especially within the Federal Capital Territory and its environs,” the statement said.

The statement also quoted the NAPTIP boss as describing trafficking of children for alms begging as the height of wickedness.

She called on parents to look after their children to avoid them being trafficked by people, who scout villages on the pretext of offering help to needy families.