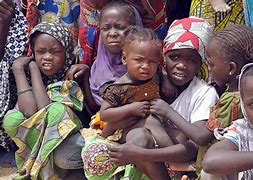 As security agents continue to battle flashpoints of conflict and insecurity across the country, a 12-year-old insurgency in the Northeast has caused the deaths of some 324,000 children under five, mostly from disease and hunger, while lives lost to conflict in the troubled states of Borno, Adamawa and Yobe may hit 1.1 million should the crisis continue till 2030, the United Nations (UN) has warned.

This means for every year that the conflict continues, the burden is felt increasingly by infants and children. Every day of continued conflict takes the lives of 170 children under five and by 2030, that could grow to 240 daily.

Previous data showed that Boko Haram militants, who launched an insurgency in 2009 against the Federal Government that has since spread to neighbouring countries, have killed more than 35,000 people and displaced over two million from their homes.

But in a new report titled: ‘‘Assessing the impact of conflict on development in northeast Nigeria,’’ the UN Development Programme (UNDP) said yesterday that “the full human cost of war is much greater. We estimate that more than 90 per cent of the nearly 350,000 conflict-attributable deaths through 2020, about 324,000 are of children younger than five,” it said.

Indirect deaths from the devastating conflict including disease and hunger resulting from the conflict’s physical and economic destruction, already far outnumber those from direct causes, the report warns.

The study also says that critical aspects of progress and development, including Gross Domestic Product (GDP), poverty, malnutrition, infant mortality, education, water availability and sanitation, may not return to pre-conflict levels even by 2030.

Findings from the report show that for each casualty caused directly by insurgency, an additional nine persons, primarily children, have lost their lives due to lack of food and resources.

The report further notes that physical and economic destruction wrought by the insurgency has dismantled already fragile health and food systems. Less than 60 per cent of health facilities in Adamawa, Borno, and Yobe states are fully functional, while a quarter are either completely destroyed or non-functional.

Attacks from insurgency have also led to massive internal displacement. More than 1.8 million Nigerians are displaced in Adamawa, Borno and Yobe states, with the vast majority (nearly 1.5 million) located in Borno. In addition, 1.8 million students were out of school in 2020 who would have been enrolled if not for conflict and without increased investment in development efforts, the fate of education of adolescents in the region hangs in the balance.

While the Federal Government has made great strides in retaking and stabilising large areas of the region, continued investment in development from both national and international stakeholders is needed.

UNDP Resident Representative, Mr. Mohamed Yahya, warned that other parts of the country may be gravely affected like the Northeast if current conflicts in North Central, Northwest and Southeast are not nipped immediately.

“We need to learn from the impact of protracted conflict in the Northeast. There is greater need for political solution as against the all-military solution being deployed to tackle the insurgency. There is a lot of injection in military investment but little of human capacity building for victims of the conflict.

“Without continued investment in development as a long-term solution, the protracted conflict in north-east Nigeria will continue to impact other parts of the country and the entire Sahel region.

“There is also a need for international partners and national stakeholders to ensure that funds are invested not only on life saving and humanitarian needs but also on mid and long-term development priorities to enable Nigeria achieve the SDGs and attain the African Union (AU) 2063.”

In terms of cumulative loss to the GDP, UNDP Senior Economic Advisor, Amarakoon Bandara, said about $27.8 billion according to World Bank assessment have been lost to the conflict in the Northeast. And by 2030, armed conflict will lead to a loss of $150 billion in economic activity, setting the region back for decades to come.

The conflict has further damaged an economy that was already strained by inequality, low agricultural productivity, and high unemployment, especially among youth. Agricultural production, the dominant economic sector in the region, has been severely cut. Buildings and transportation infrastructure have been destroyed, while road closures and military curfews have impeded the movement and sale of certain goods.x

Electricity, energy, and telecommunications networks have been destroyed or damaged. Construction work was halted while investment stalled, putting planned improvements on hold. An estimated 75 per cent of all water and sanitation infrastructure was destroyed. Though reconstruction has already begun in some areas, progress has been uneven.

As of 2019, 81 per cent of people living in Yobe, 64 per cent in Borno, and 60 per cent in Adamawa suffered from multidimensional poverty, a measure that accounts for deprivation with respect to standards of living, health, and education, while women and children make up 80 per cent of the displaced population in the region, who have limited options for work and survival, including difficulties accessing resources.

Insecurity has led to declines in agricultural production and trade, reducing access to food and threatening the many households that depend on agriculture for their livelihood. Thousands of displaced people also lack access to food, health facilities, shelter and clean water, with children more vulnerable, the report added.

The report findings suggest that to overcome the conflict, development efforts need to be focused on the stabilisation of affected areas through a community-level approach that enhances physical security and access to justice, rehabilitation of essential infrastructure and basic service delivery as well as revitalisation of the local economy such as market stalls, schools and police stations.x

This UNDP report is coming on the heels of a United Nations OCHA study, which in its findings reinforced the recommendation that stabilisation is the way to prevent upwards of 29 million people in the Sahel Region needing costly humanitarian aid.

The Boko Haram group split into two in 2016 with its rival Daesh-allied faction, ISWAP becoming the dominant threat. Despite ongoing military operations, the groups have continued to launch attacks, spreading violence to parts of neighbouring Cameroon, Chad and Niger.

In the Lake Chad region on the north of Borno, the UN said “over 3.2 million individuals are displaced, with 5.3 million food-insecure people at crisis and emergency levels.”

The situation is worse in the northeastern states. “In northeast Nigeria alone, 13.1 million people live in areas affected by conflict, out of whom 8.7 million are in need of immediate assistance,” it said.

MEANWHILE, the Country Representative of Food and Agricultural Organisation (FAO) of the United Nations, Fred Kafeero, has said that insurgency has prevented 68,800 farmers access to agricultural inputs in the Northeast.

According to him, inaccessibility to improved seeds and fertilizers have resulted into food insecurity and poverty among the populace.

Kafeero disclosed this yesterday, while flagging off the 2021 rainy season farming intervention at the Farm Centre, Maiduguri, Borno State.

He noted that farmers’ harvests contribute significantly to food security and income generation throughout the year. “Access to agricultural inputs for high yields also saves lives and livelihoods of farmers,” he said, adding that the distribution of seeds and fertilizers have contributed to the building of people’s resilience to conflict.

He said that this year, 65,800 household farmers were supported with agricultural inputs and livestock restocking for fattening, while 40,000 farmers were targeted for the distribution of inputs, noting that food security and livelihood conditions in insurgency-affected states, still require humanitarian assistance, particularly as the COVID-19 pandemic reversed recent gains.

While lamenting food insecurity, he said: “The latest analysis results project that over four million people will be in need of food assistance between June and August 2021,” warning that there will be an increase of 19 per cent in food requirements.

Borno State Governor, Prof. Babagana Zulum, disclosed that the state has been devastated by insurgency, as 70 per cent of farmers were affected with the destruction of their means of livelihoods. He added that the state government, as part of its 10-pact agenda, has prioritised agriculture for food security and farmers’ incomes.

Zulum, who was represented by his Chief of Staff, Prof. Isa Hussaini, said: “Investments in the agricultural sector provide buffers for insurgency devastated areas,” he said, adding that cohorts have been established for skills development centres for vocational training and technical skills acquisition across the state.