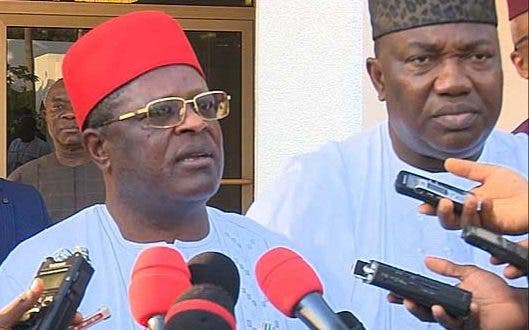 LAST week, some leading Igbo politicians, including members of the national and state Assemblies, ministers and other stakeholders, met at Igbere, Abia State, to chart the way forward to realize the much clamoured 2023 Nigerian President of Igbo extraction. The meeting was well attended. While the meeting was on in Igbere at the country home of Senate Chief Whip, Chief Orji Uzor Kalu, the South East governors met virtually and disassociated themselves from the meeting.

A communiqué issued at the meeting and signed by Senators Orji Uzor Kalu, Ike Ekweremadu, Anyim Pius Anyim, and others, at the end of a bipartisan meeting, said the Presidency has rotated between Northern and Southern Nigeria and among the various geopolitical zones with only the South East left out. They said the South East as a major geopolitical zone in Nigeria and Ndigbo, being one of the three predominant tribes in the country; they must take their rightful position in national polity.

“With the support of other geopolitical zones and ethnic groups, the position of Nigerian President in the 2023 general elections in all political parties should be zoned to the South East for the sake of justice, fairness and equity. The South East zone is united and indivisible in advancing the cause of the region and Ndigbo,” part of the communiqué said.

In an opening remark, the convener of the meeting, Kalu said the gathering was intended to unite all the prominent politicians from the zone and ensure the unity of purpose among them for the emergence of Nigeria’s next president from the zone. He said the meeting would help to disprove critics “who believe that we cannot meet to discuss issues affecting us, especially our aspiration to produce Nigeria’s president in 2023.”

However, the South East governors rose from their virtual meeting and disassociated themselves from the Igbere meeting and its outcome, saying, ”If there should be such a meeting which they feel is very necessary, the governors must be informed and be part and parcel of calling such a meeting.”

Chairman of the Southeast Governors’ Forum and Governor of Ebonyi State, David Umahi stated this during a virtual meeting with other Governors of the region.

According to Umahi: “Today, January 5, 2021, the South East governors had their meeting and all the governors were in attendance and the meeting resolved as follows:

“There was a bi-partisan meeting called today and the initiator went ahead to use the names of governors without consulting them as part of the conveners of such a meeting.

Reacting to the stand of the governors, the Director of Media and Publicity of the elite Igbo group, Alaigbo Development Foundation, ADF, Chief Abi Onyike dismissed them, saying they are playing games and always want to be seen to be very important and at the top.“The South-East governors are always playing games because Ndigbo are pampering them. They have been disobeying Igbo collective decisions with recalcitrance. That cannot happen in the South-West. The Igbo political mentality is very problematic.When Ohanaeze decides, South East governors will do as they wish.