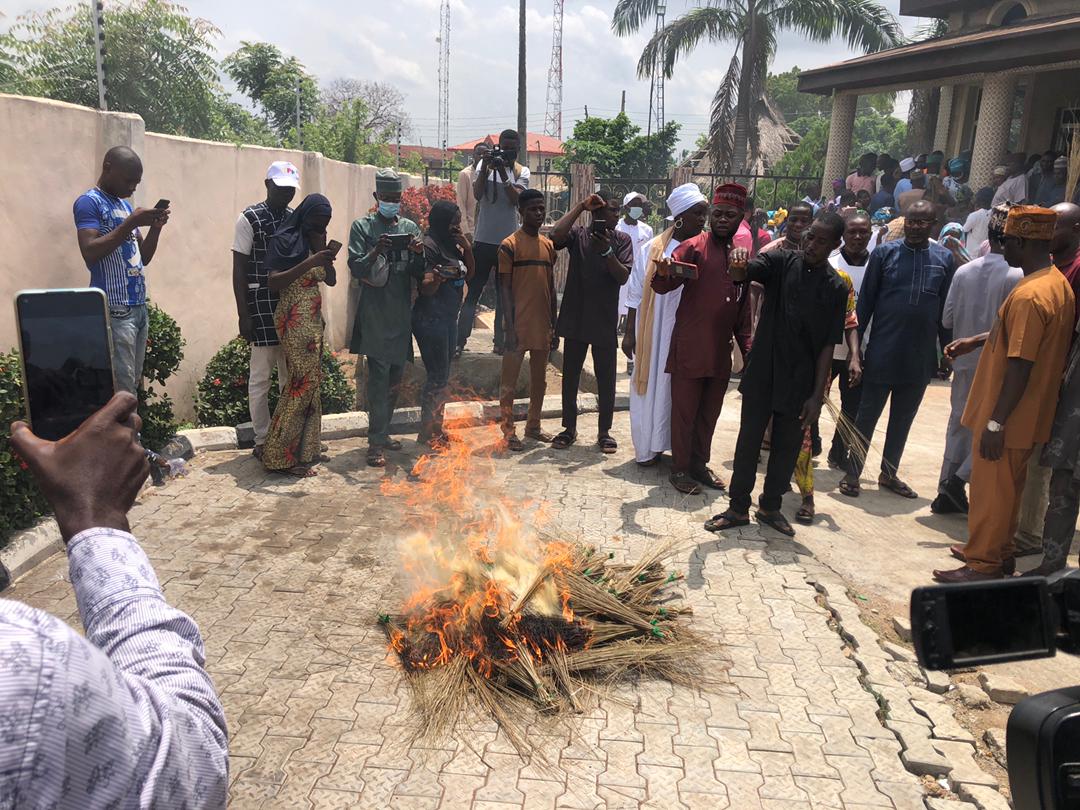 No less than 20, 000 All Progressives Congress, APC, members are believed to have withdrawn membership from the party after a symbolic burning of brooms, the party emblem, and flags in Ilorin, yesterday.

The event held at the MM Event Center, Offa Road, GRA Ilorin, and was also used to announce the creation of a Kwara Third Force, KTF, in the midst of the intra-party feud going on in APC.

Speaking at the event, Abdulfatai Abdulrahaman, chairman, APC Kwara Central Senatorial zone explained that the party members are left with no other choice after, as he described it in his opening remarks and title of the speech he gave at the occasion, “the integrity of APC in Kwara has been Jeopardized; and the crisis ridden party can no longer guaranty hopes and aspirations of Kwarans.”

“As you are all aware, Kwara APC has been embroiled in one crisis or the other immediately after the party primary before the 2019 elections, stretching into the campaign period and lingering up till date,” Abdulrahaman said.

He further openly accused Governor Abdulrahaman Abdulrazak of orchestrating the crisis in the party for selfish reasons.

On this, he gave a litany of instances.
“It has come to our attention and with copious evidence, too, that the current state governor of Kwara has concluded arrangements to ensure that all the elective positions from the wards to the state level work only for his selfish interest in the desperate bid for re-election in 2023.

As a result, said the party chieftain, “we the over twenty thousand card carrying members of the All Progressive Congress which include Senatorial chairman Kwara Central, Local government party chairmen, local government women leaders, youth leaders, ward chairmen as well as APC party stalwarts across all the sixteen local government areas in the state, hereby denounce APC and form a KWARA THIRD FORCE for the yearnings and betterment of kwarans.”

“We hereby unequivocally denounce APC and its shenanigans. We are using this platform to announce the formation of a KWARA THIRD FORCE, created principally to cater to the yearnings of long suffering Kwarans and to see to their betterment.

“We are also using this platform to call on all well-meaning Kwarans to remain steadfast and patient, shun violence, unnecessary struggle and agitation regardless of whatever provocation by a party that could mindlessly throw away the largest chunk its members,” said the party chieftain from Kwara North.

According to him, APC from the beginning, was a confederation of different power blocks; each with its diverse political ideology, ambition and antecedents. It was thought that the coalition of the political tendencies would not only wrest power from the former holders but also create social harmony and appreciation of diversity for a better Kwara.

It has been rather disheartening, shameful and inexcusable for the group that Kwara APC can’t manage its success even two years into its four years term in the saddle of governance in the state.

“The intra party crisis has been on for far too long and has gone on unabated. The struggle for the soul of the party which can’t be divorced from the 2023 political ambitions has been the root of the lingering internal squabbles.

“The aspirations, hopes and expectations of party members to reap the fruits of their collective labours have been dashed, due largely to self inflicted political injuries and needless strife in the party.

“In short, this is not what KWARANS bargained for,” he said.

The chieftain also used the occasion to accuse the national caretaker committee of the party under Mai Mala Buni, governor of Kebbi of complicity in the goings on in Kwara APC.

He stated that the crisis has reached its peak during the recently concluded APC membership revalidation and registration exercise which according to them was largely flawed with deliberate policies and grand orchestration to deregister and disenfranchise selected members of the party.

“The attention of the Senator John Danboi-led team and the National Secretariat of the party were drawn from different quarters to the perfidious and glaring aberration of the registration process. But to our dismay, nothing was done to address the grievances.

“Since they precluded majority of the APC members across Kwara State from exercising their legitimate right of membership registration and revalidation, we are left with no option but to state as that it is impossible to achieve developmental goals we are aiming for KWARANS in the midst of the chaotic situation we found ourselves in Kwara APC.

‘‘We State that a grand design that denied majority of party members the opportunity to register and revalidate their membership across the state is a 2023 permutation agenda.

“We can never cross our fingers and watch the game from the sideline.

“The deliberate inaction in addressing the lingering crisis in Kwara APC has become obvious to all discerning minds that the true agenda to deregister and refusal to revalidate thousands of members across the state was a grand plot that has the backing of the National Caretaker Committee of the party,” Abdulrahaman said.

He further added that the group will soon announce a new party through which it would attain its objectives for Kwarans.